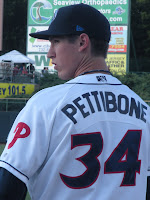 The Lakewood BlueClaws rallied in the 9th inning on Monday afternoon, but fell short, losing to the Orioles affiliate Delmarva Shorebirds 3-2. The teams had split the first 4 games of the series that began Thursday, and the loss in the 5th and deciding game locked in the first unsuccessful series that the defending South Atlantic League champions experienced all year.

BlueClaws righty Jonathan Pettibone, who will turn 20 years old next week, made the start and continued his stretch of solid outings. Pettibone held the Shorebirds scoreless through 4 innings, but let up 2 earned runs in the 5th inning, when Point Pleasant, NJ resident TJ Baxter led off with a single and was driven home on a double by shortstop Garabez Rosa. Second baseman Mike Mooney moved Rosa over with a sacrifice bunt, and Rosa scored on a sacrifice fly by right fielder Brian Conley.

Pettibone, who allowed just those two earned runs over 6 2/3 innings, didn't necessarily feel pleased with the outing. "I didn't really have good command today. My (slider) was inconsistent and my change up was kind of out of the zone and wasn't really effective," Pettibone stated after the game.

Delmarva added a run in the 8th inning, when Lakewood reliever Jesse Beal loaded the bases by allowing 2 walks and a single. Catcher Justin Dalles drove a fly ball deep to right field that was tracked down by Anthony Hewitt for a sacrifice fly, scoring Tyler Townsend. Beals then escaped the inning by enducing a double play off the bat of Baxter.

The BlueClaws looked to be going down without a fight, but began the 9th inning with 3 straight hits, after collecting only four safeties over the first 8 frames. Jonathan Villar led off the 9th, pounding a triple off of Delmarva reliever Tom Phelps and was quickly plated on a single by Leandro Castro. After Castro moved to second base on a wild pitch, "The Boss" Jon Singleton struck a single to score the second Lakewood run, which chased Phelps. Shorebirds managers Ryan Minor called for Josh Dowdy, who shut the door on the BlueClaws comeback hopes and sent 7,157 fans home disappointed.

With his effort on Monday, Pettibone has now posted a 2.36 ERA over his last 6 outings. Considering the recent turnaround, after Pettibone strung together 4 outings from May 8th through June 6th where his ERA was 12.00, he can still leave a loss with a progressive outlook. "There were some positives, and I'll just go forward from here and get better next time."


BlueClaws Notes...
It is official. With the rescheduling of the Phillies/Rockies rain out for September 2nd, the scheduled jersey retirement ceremony for Ryan Howard has been cancelled for this season. The BlueClaws and Phillies plan to work together to try the event again in 2011.

Phillies 2008 1st round draft pick Anthony Hewitt went 1-for-3 in Monday's contest, bringing his overall batting average up to .212. Hewitt has struggled mightily in 10 July games, batting just .114 this month. In 20 day games this season, Hewitt has posted a .125 average.

Outfield prospect Jiwan James laced two singles on Monday, marking his 20th consecutive game with at least one base hit.