Bats Bounce Back Under Gross 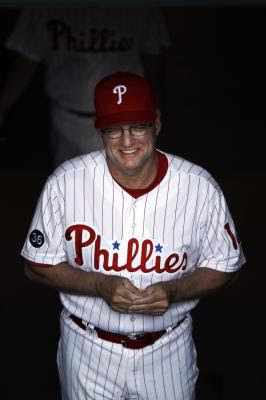 The coaching switch has proved successful thus far. Since replacing hitting coach Milt Thompson with Greg Gross last week, the Phillies have gone undefeated in 5 games. The defending National League champions had been struggling to score runs this season, but have averaged 6.8 runs per game since the change. The team averaged 4.49 runs per game through their first 95 contests this season.

Certainly, the offensive improvements could all be coincidence. But for those who long hoped for the Phillies to mix up the team personnel, in order to obtain some better results...the team made a small change and the production has picked up. If there's a spot to place credit right now, it's with Gross. And, on the other hand, if the lineup's output recedes at any point, Gross would be first in line for that credit as well.
_____________________________________
Reminder- Today is PhoulBallz Phillies Wednesday. Tune in to The Shore Sports Report around 4:05pm to listen in as I talk Phillies baseball with Joe & Mike. Check it out live on WOBM 1160 AM, Shore Sports 1310 or online with this link.