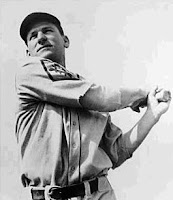 Whitney, who hailed from Texas, kept the solid production going and drove in over 100 runs in 4 of his first 5 seasons in the big leagues. 1929 marked the first of two consecutive seasons with 200 or more hits by Whitney.

In June 1933, Whitney was dealt to the Boston Braves with Hal Lee for Fritz Knothe, Wes Schulmerich and cash. Whitney's offensive production slowed down in Boston. In just under 3 years with the Braves, Whitney batted .258, hit 24 homers and drove in 194 runs in 358 games.

By the end of April 1936, Whitney was traded back to Philadelphia for utility infielder Mickey Haslin. The move agreed with Whitney, as he batted .294 in 110 games with the Phillies that season, and his average soared to .341 in 138 games in 1937. Whitney also became an all-star for the Phillies in 1936.

Whitney would soon be plagued by injuries and struggled on the field. His last season as an everyday player came in 1938. The following year, he would lose his playing time to another player with the same nickname. Merrill "Pinky" May, a Rule 5 draft selection from the Yankees the previous October, debuted with the Phillies and posted a .287 batting average and led the league in sacrifice hits, with 25, in 135 games played. Whitney was released by the Phillies following the 1939 season, and his days in Major League Baseball were over. 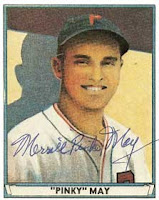 In his second season, 1940, the subsequent Pinky, May, was selected to the NL all-star team. May locked down his new gig with the Phillies because of his tremendous defense. He led all National League third basemen in fielding percentage three different times. While May's glove work was top notch, his offensive statistics would never match the exceptional numbers that Whitney posted. May's best season at the plate was his sophomore campaign in '40, when his batting average was .293, and he had 1 homer and 48 RBI in 136 games.

May, an Indiana native, played five full seasons for the Phillies before leaving professional baseball to serve in the navy during World War II. Upon his return, May was no longer a sharp Major League talent and he was released by the Phillies in 1946. He spent time playing for a semi-pro team in his home area that summer. The following year, May was hired to be a player/manager for the Double A Albany team, a Pittsburgh affiliate.