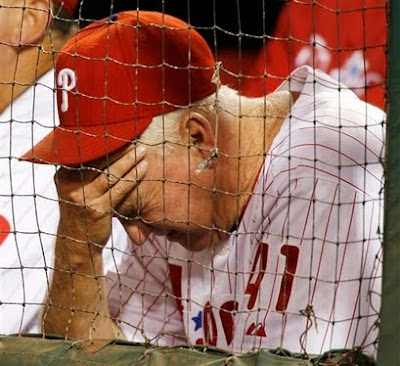 The Phillies' offense has been struggling. Dealt another knuckle sandwich in their series opener against the Metropolitans, the defending National League champs have now gone scoreless in 28 of their last 29 innings.

New York threw R.A. Dickey on Tuesday, while Boston used Tim Wakefield on Sunday. The two pitchers, known for their knuckle balls, combined for 14 shut out innings against the Phillies, who have scored just 15 runs in their past 7 games, dating back to Roy Halladay's 2-1 loss at the hands of Zach Duke and the Pirates last Tuesday.

Dickey spoke with Wakefield on the telephone prior to Tuesday's game, and the Red Sox veteran had some words of advice for the Metropolitans' interim starter. "His advice to me was that they were a free-swinging team, and I found that to be the case," Dickey told reporters following New York's 8-0 win over the Phillies. Wakefield also shared some tips on fastball locations to certain Philadelphia batters that induced some fly ball outs, according to Dickey.

Some players, like Carlos Ruiz, are hurting the team more than others. Ruiz, who hit into a 1-2-3 double play with no outs and the bases loaded on Tuesday night, is 1-for-17 (.059 avg) in his past 6 games. Greg Dobbs has been another culprit, but not just during this week-long stretch. Dobbs, who is batting .150 on the season, is just 1-for-18 (.055 avg) as a pinch hitter this season. Dobbs set the Phillies franchise record for pinch hits in a season just two years ago, when he had 22 pinch hits and posted a .355 batting average as a pinch hitter.

Also worthy of note- Lead off man Shane Victorino has not scored a run during this 7-game stretch.

The Phillies will try to turn their own fortunes around Wednesday night, when they face Japanese hurler Hisanori Takahashi.