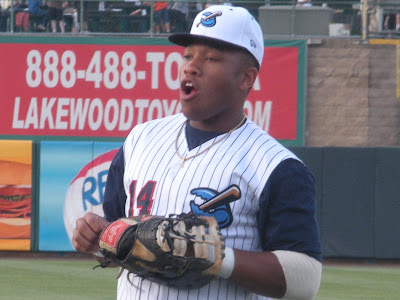 Jonathan Singleton was selected by the Phillies in the 8th round of the 2009 amateur free agent draft out of Millikan High School in Long Beach, California. Assigned to the Single-A level Lakewood BlueClaws earlier this month, out of extended spring training, after first baseman Darin Ruf was promoted to Clearwater, Singleton homered in his second at bat with the BlueClaws and has been on a tear since then. Singleton, an 18-year-old lefty batter, has hit successfully in 10 of 11 games played since joining the BlueClaws. Thus far with Lakewood, he's batting .378 with 3 doubles, 3 homers and 10 RBI.
PhoulBallz.com had a chance to speak with Jonathan over the weekend and that interviews lies ahead...

Talk a bit about your quick success since your recent assignment to Lakewood.
I'm glad to be here, ya' know. It's a lot more fun that the (Gulf Coast League) and extended spring training, so I'm just glad to be here.

What was your experience like turning pro last year?
It was a lot to take in. First, after signing, I went to the GCL and it was hot. I thought baseball was going to be like that for the rest of my pro career, but I'm glad it's not.

How did the draft experience last year compare to getting the call, this month, saying you were being assigned to Lakewood?
They were about the same. I was pretty excited for both of them, I'd say.

At this young age, you are already ranked pretty high in the Phillies system as the 20th best prospect by Baseball America. How does that sort of recognition effect your outlook?
I try not to let it effect me at all. I try to go out there and play my game. It's still a very, very big honor to get that type of recognition though.

What aspects of your game are you working most on improving?
Everything...the defense, the hitting, base running. Everything.

Watching the game from a fan perspective before you signed a professional contract, who were some players that you looked up to?
I liked Albert Pujols and Alex Rodriguez because they are big time hitters.

Who in the Phillies system has had the biggest impact on you since you signed with the organization?
I'd say Zach Collier and (Domonic) Brown. Zach, he's been a friend since before we got drafted and since I was drafted, I've become a lot closer to him. But, D-Brown, I see the way he goes about things and the way he does things and it just inspires me and motivates me to do better.

Which ballpark would you most like to play in some day?
I'd say Dodgers Stadium and Angels Stadium, 'cause they are closest to where I am from.

Who is your favorite non-baseball athlete?
LeBron James. He's a real athlete. He goes about his business and he does very well. 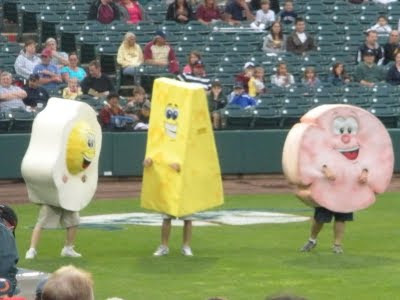