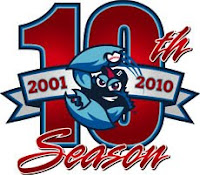 If you have the means, I highly recommend picking up some tickets to see the Phillies' single A affiliate, Lakewood BlueClaws. The pitching staff continues to excel and a brand new masher has taken over first base. It's time to get out to FirstEnergy Park and see what all the fuss is about.

Friday night's convincing win over the West Virginia Power provided loads of examples for phans in attendance of why they should be excited about the young talent on their team by the shore. With a barrage of hits and some exceptional pitching, the BlueClaws downed the Pirates affiliate West Virginia Power by a score of 8-1.

Lakewood began the scoring in the second inning when Sebatian Valle drove home Anthony Hewitt, who led off the inning with a single, moved up on a fielders choice and stole third, with a single. The Power responded quickly, tying the game up in the third inning on an RBI single by first baseman Aaron Baker. The 'Claws clapped back in the bottom of the frame, taking the lead once again by plating a leadoff base runner, Jonathan Villar, who singled, stole second and moved to third on catcher Ramon Cabrera's throwing error. Villar scored on Jiwan James' sacrifice fly.

The runs kept rolling as Lakewood would score in 5 straight innings. BlueClaws hitters got four consecutive hits to start the 4th inning, which chased Power starting pitcher Jason Erickson. The 'Claws new first baseman and cleanup hitter Jonathan Singleton smashed a double to start the inning, and again the leadoff runner would score. Anthony Hewitt quickly followed with another double to drive in Singleton. Sebastian Valle knocked in another run with a safety to put the BlueClaws ahead by a 4-1 score. In the 5th inning, Singleton was at it again, as he went deep for the third time in 9 games with Lakewood, with two runners on. Everyone in attendance, including Singleton, knew the ball was gone right off the bat, as Jonathan destroyed the pitch from Power reliever Ryan Kelly. The BlueClaws capped the scoring in the 6th inning as Jiwan James became the 8th Lakewood batter to successfully get a hit in the game when he doubled home Domingo Santana.

Singleton, who through nine A-level games is 12-for-30 (.400 avg) with 2 doubles, 3 homers and 9 RBI, joined the BlueClaws last week out of extended spring training after Lakewood's opening day first baseman, Darin Ruf, was promoted to Clearwater. Singleton, an 8th round draft pick in 2009, batted .290 in 31 games with the Gulf Coast League Phillies after signing with the Phillies last year.

Already ranked as the 20th best prospect in the Phillies system by Baseball America, the 18-year-old Singleton credits another big time Phils prospect with helping him along since he joined the Phillies organization. "(Domonic) Brown...I see the way he goes about things, and the way he does things and it inspires me and motivates me to do better," Singleton said after Friday's contest.

On the other side of things, another star of the game for the BlueClaws was starting pitcher Jarred Cosart. The Texas native, who spoke with PhoulBallz recently, hit 97 mph with his fastball early and he used it to mow down West Virginia batters all night, including retiring 12 Power batters in a row in one stretch. Cosart struck out 9 batters over 7 innings, scattering 3 hits and walking just 2. Speaking about his command, Cosart stated, "I didn't have my best curveball tonight. But my change up was the best it's been all year."

Cosart now boasts a 5-1 record and a 3.12 ERA. He has struck out 52 batters in 40 1/3 innings pitched this season. As Cosart continues to shine, more and more phans have begun to notice and a buzz has started to grow about the 19-year-old 28th round draft selection from 2008. Asked about the Cosart Watch by Phillies phans that are excited about his progress, Jarred told me, "I really try to avoid all that. It's nice to hear though. I'm always trying to prove (myself) and show what I've got. So, the longer it goes, the better it is."

Two Lakewood starting pitchers are ailing. Lefty Nick Hernandez was placed on the disabled list on Friday and should miss two starts. Hernandez is slated to meet with Phillies doctors on Monday or Tuesday. Jonathan Pettibone, who left his most recent outing on Thursday with shoulder stiffness, will also miss his next scheduled start, in order to rest the injury.