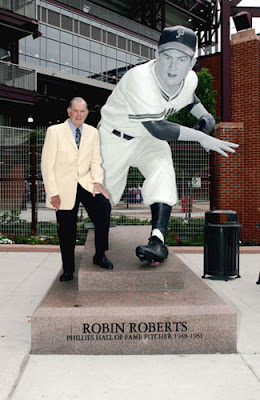 The baseball world lost one its all-time greats on Thursday morning as Hall of Fame pitcher Robin Roberts passed away at the age of 83. An official release from the Phillies stated that Roberts died of natural causes at his Florida home.

Roberts had a 286-245 career record with a 3.41 ERA. As a Phillie, Roberts posted a 234-199 record and completed 272 games. Also, from 1949-1960, he won at least 10 games each season. That streak of 12 straight seasons with double-digit victories is 2nd, only to Steve Carlton, in team history. Roberts also threw 3 one-hitters in his Phillies career. A seven time all-star, Roberts was inducted into the National Baseball Hall of Fame in 1976.

Roberts was attending Michigan State University on a basketball scholarship, when the Phillies convinced him to sign a professional baseball contract by offering him a $25,000 bonus. At 21-years-old in 1948, Roberts attended his first spring training, before being assigned to the Phillies minor league affiliate in Wilmington. In his first pro start, Roberts pitched a complete game and struck out 17 Harrisburg batters. By mid-June, Roberts was called up to the big leagues, after posting a 9-1 record, a 2.06 ERA and striking out 121 batters in 96 innings.

In his Major League debut at Shibe Park, he held the Pirates to 5 hits, but lost the game 2-0. He notched his first Major League win 5 days later, when he downed the Reds 3-2 in Philadelphia. Roberts had a 7-9 record in 20 starts by season's end. He posted a 15-15 record the following season, and matured into one of the game's best pitchers by 1950.

Roberts was part of the legendary 1950 pennant winning Phillies team, affectionately known as The Whiz Kids. In 39 starts that year, Roberts went 20-11 with a 3.02 ERA. In helping the Phillies advance to the World Series, Roberts needed to work overtime down the stretch. On October 1st, with the Phillies needing a win over the Dodgers on the final day of the season to clinch the pennant, Roberts stepped in to start his third game in 5 days. He was matched up against Dodgers ace Don Newcombe and both hurlers went into extra innings with the game tied 1-1. Roberts earned his 20th win of the season, when Dick Sisler hit one of the biggest homeruns in team history, a 3-run smash in the 10th inning, that clinched a World Series berth for the Phils.

Roberts' career with the Phillies would end in 1961. Following his departure from his first big league town, Roberts also spent time with the Orioles, Astros and Cubs before his career was over.
Roberts maintained close ties to the Phillies throughout retirement. According to his son, Jim, Mr. Roberts did not miss a Phillies game on television. He also would appear at various organization events, including annual visits to spring training.
Roberts' jersey number, 36, is retired by the Phillies and he is immortalized at the Phillies' current home venue, Citizens Bank Park, with a large "black & white" statue honoring him outside of the first base gate. Starting Friday, the Phillies will don black #36 patches on their jersey sleeves for the remainder of the season.