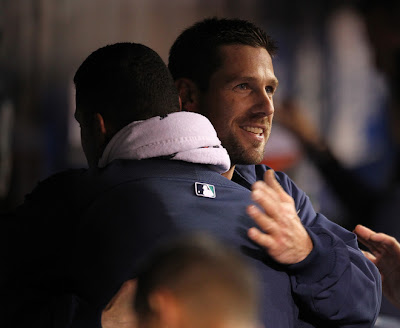 On the same night a newly activated Ian Kinsler made his season debut for the Texas Rangers, Seattle's new co-ace, Cliff Lee, made his season debut as well. Lee shined and shut down the Rangers offense, in his first American League action since he was dealt from Cleveland to the Phillies last July.

In 7 innings, Lee struck out 8 batters and allowed just 3 hits and no walks. Lee's fastball steadily hit 93mph and he easily showed the 34,055 Mariners fans in attendance that the abdominal strain that kept him out of action since spring training was no longer an issue.

Surprisingly, Lee was not the pitching star of the night, as Rangers starter Colby Lewis continued his solid season with 9 shut out innings, striking out 10 Mariners in the process. During one stretch, Lewis retired 21 consecutive batters. Both pitchers were plagued by the same issue- neither offense could muster a run and the game went into extra innings, locked in a scoreless tie.

The game's first run was scored in the top of the 12th inning, when Elvis Andrus came home on a wild pitch by Brandon League. Michael Young then scored on a ground out and Texas would hold on to win the game 2-0 in 12 innings.

Kinsler, the all-star second baseman, had a single in five at bats in the game for the Rangers.

Lee's next start will be next week in Seattle against Tampa Bay.