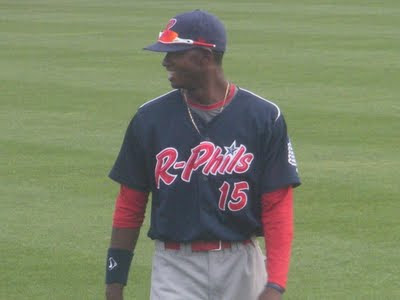 It could be time to promote Reading Phillies outfielder Domonic Brown up a level...or two...or three...? Currently, the Phillies' top prospect is dominating Double A level pitching throughout the Eastern League.

In 27 games played, Brown's batting average is third in the league at .340 (32 hits in 94 at bats). He is tied for 2nd in the league in HR with 7. Most impressive of all is that Brown leads the EL in OPS (on base % + slugging %). That OPS is 1.088. Not blown away by that statistic? Well consider that the batter who is second in the Eastern League in that category, Metropolitans prospect Lucas Duda, is over 100 points behind Brown. Duda's OPS sits at .983 through 32 games played this season.
The lefty hitter, Brown, even turns heads where, perhaps, he shouldn't. Against left-handed pitchers, Brown is batting .333 and his OPS is higher than it is against right-handed pitchers. Vs. Left/vs. right OPS splits- 1.185/1.060.
Brown's overall numbers have been boosted by a torrid May, as he's been much hotter lately. In 11 May games, Brown's batting average is a sizzling .381. Of his 7 homers, 6 of them have come since the start of May.

No matter what Flavor Flav tells you, it may very well be acceptable to believe the hype. Get ready for Domonic Brown, Phillies phans.