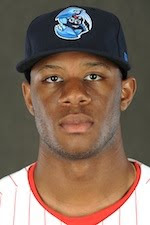 Anthony Hewitt is an outfielder for the Phillies low-A level affiliate, the Lakewood BlueClaws. Hewitt, a first round draft pick by the Phillies in 2008 began his first full season as a pro in extended spring training last year. Hewitt later joined Williamsport, of the NY-Penn League, where he batted .223 with 7 HR in 61 games. Now, making strides to improve himself, the 21-year-old Hewitt is hitting .250 in 23 games played, for Lakewood, with 3 homers and 18 RBI.

I spoke with Anthony yesterday. Here is that interview...


Can you speak a bit about your progression, from being drafted to where you are now in Lakewood?

The draft experience was great. After I got drafted, I went to rookie ball, in the Gulf Coast League. And that was an experience to adjust to the speed of the game and the following year I went to Williamsport...still adjusting, still learning. And at the end of the year in Williamsport, it started clicking a little bit. And I came to Lakewood this year. The first week, first week and a half, everything was great. I gotta get used to going up and down and find my niche and staying within myself pretty much.


It seems as though after a slow start to your professional career, you've really picked up your output. What do you attribute to the advancement and strides forward in your game lately?

I just keep working and stay confident, cocky and believe in myself. And (I) don't get mad, 'cause you've got plenty more games and at bats.


What are your impressions of the facility and fans here in Lakewood?

It's nice. Nice facility, nice fan support. It's an experience that I am taking in and I'll never forget. (This venue) sort of puts you in the mindset that the Phillies is an organization trying to groom their future players in the minor leagues and this step gets you in the mindset that they want to win and they care about their minor league players. This is a place close to Philly and we get some rehabbers and we learn from those guys. I think it's a great place to play and a great stepping stone to the next level.


Who was your favorite player growing up?

Many! Soriano, Jeter, A-Rod, Griffey, Bonds, and the list goes on. I don't just have one favorite player, I have players that I take a little bit of their games and I look at myself and think, "Okay, I can do that. I can do this." I like baseball, so I try to look at everyone's game and their craft.


You were drafted out of Salisbury High School in Brooklyn, NY and you mentioned Jeter and some other Yankees players. Were you a Yankees fan all through your youth?

Yeah, definitely. I went to plenty of Yankees games, when I was little. I used to take the 4 train all the way there and get some "nose bleed" tickets and have a blast.


How is the coaching staff here in Lakewood and what have you been able to pick up from them that you haven't seen or learned prior to joining the BlueClaws?

I think the coaching staff is great. Having (hitting coach) Greg Legg, someone that's been around for a while, especially with the Phillies organization. He's a good hitting coach that knows a lot about the game. And we got Mark Parent, a former big leaguer, somebody to pick their brain. He's played with Hall of Famers, so I try to pick his brain. You know, "What kind of work ethic did those guys have?" "What did you do?" Stuff like that. It's good to learn. I pick their brain every day. Let's say I'm DH'ing or something, not playing the field, I'll stand next to those guys and talk about the game, my at bats, just watching and learning and seeing how they react to situations.


Do you think there are any of your Lakewood teammates that are underrated to this point of the season?

Underrated? No. If you're here, you're good. Period.


I coach teen-aged players. What advice would you have for those types of kids who might be hoping to continue playing baseball beyond high school?

Work harder than the next guy. Never give up. And always have as much confidence in yourself as possible. If you believe it, if you dream about it, it's possible.


What type of music would be found on heavy rotation in your collection?