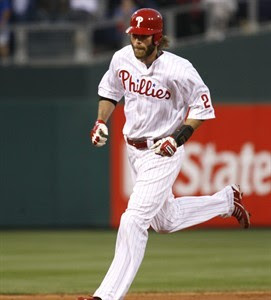 Since the Rockies swept the Phillies out of the 2007 playoffs, Philadelphia has been relentless against their new rival. Last October, the phrase "Get me to the plate, boys" was born, as Ryan Howard ended the Rockies' season. This week, the Phillies return to Colorado for the first time since then.

This week's clash of NL contenders has the third place Rockies (15-16) hosting the first place Phillies (19-12) for a 3 games series.

Read ahead for details on the pitching match ups and other key notes from this series.

Wednesday, 3:10pm. Jamie Moyer (4-2, 4.38 ERA) vs. Esmil Rogers (0-1, 6.39 ERA). Fresh off becoming the oldest Major Leaguer in history to throw a complete game shutout, Moyer will face Colorado, against whom he has a career record of 1-5 and a 6.16 ERA. In 2 starts at Coors Field, Moyer is 0-2 with a 9.00 ERA. Ryan Spilborghs is 6-for-11 (.545 avg) with 2 homers against Moyer. Rogers will be making just his 4th Major League start. Rogers is being used in the starting rotation as the Rockies' staff has been plagued with injuries (Jason Hammel, Jorge De La Rosa & Jeff Francis are all on the DL).

Carlos Gonzalez, who the Phillies had trouble containing in the playoffs last season, is expected to be out of the lineup for the first 2 games of this series, as his uncle passed away and Gonzalez is attending the services in Venezuela.