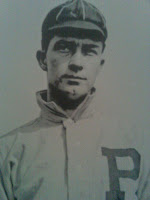 Thomas "Tully" Sparks was a pitcher with the Phillies in 1897, then again from 1903-1910. Sparks made his Major League debut with the Phillies, allowing 9 earned runs in 8 innings pitched, and didn't start another game with Philadelphia for more than five years. In the meantime, he saw stints with Pittsburgh, the New York Giants, the Boston Americans and Milwaukee.

When Sparks rejoined the Phillies, he posted an unimpressive record of 11-15, which overshadowed his solid 2.72 ERA on the season. 1903 was the first of 7 straight seasons in which Sparks posted an ERA for the Phillies under 3.00. In 1904, Sparks' ERA improved, but his record slipped to a dismal 7-16.

The following season, Sparks posted a winning record, going 14-11 and his 2.12 ERA was best on the team. In 1906, Sparks won 19 games with Philadelphia and threw a career high 6 shutouts, including one against Giants ace Christy Mathewson in late August. Also in 1906, Sparks completed 29 games in 37 starts.

Sparks' best season came in 1907 when he reeled off 10 straight victories, beginning in July, and finished with a 22-9 record and a 2.00 ERA. Sparks' hot streak included wins in 14 of his final 16 starts that season.

Some pitchers are at their best when they face off against the best and Sparks was one of those pitchers. In 4 starts against the eventual 1907 World Champions, that season, Sparks went 3-1. The lone loss was a 1-0 defeat. In those 4 games, Sparks allowed 5 runs in 36 innings (1.25 ERA).

Unfortunately for Sparks, his numbers would slide after that career year. In 1908 he posted a 16-15 record and in 1909 he went 6-11. The following season, Sparks struggled in 3 starts and did not earn a win. He was released by the Phillies in early June and retired from baseball.