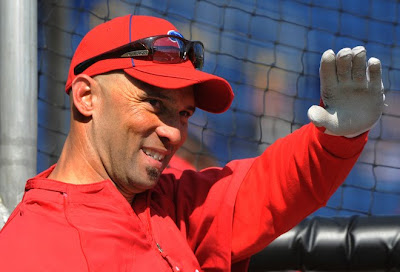 After a game on June 17th last season, Ibanez was placed on the disabled list with a strained groin that kept him out of action until July 11th. After the return, Ibanez's stats steadily declined. With a .312 avg, 22 homeruns and 59 RBI, through 62 games, at the time he went on the DL, Ibanez had just 12 homers, 34 RBI and batted .238, in 72 games, after he returned from the injury.

Since July 11th, Ibanez is hitting .235 in 96 regular season games...not an all-star performance, by any means.

There has been plenty of talk about what the Phillies will do with Jayson Werth, as his free agency draws closer, with his current contract due to expire following the 2010 season. But perhaps Ibanez's presence and reduced output is the more pressing issue. If the Phillies choose to make a trade that clears payroll dollars or enhances their own flexibility for this coming off-season, or to retain Werth, Ibanez might be the one to send packing. And doing that before everyone around MLB completely forgets his hot 2009 start and his starting all-star bid might be the way to go. I surely won't suggest that to be an easy task, I simply prefer the team to keep Werth over Ibanez.

Top prospect Domonic Brown, a 22-year-old outfielder, potentially could be ready to be an everyday MLB hitter soon. Brown, who plays mostly rightfield, could possibly slide right into the Phillies lineup if the team does not re-sign Jayson Werth to return next season. The trouble with that is Brown is a lefty hitter, just as Chase Utley, Ryan Howard and Raul Ibanez are. Werth is a key piece of the Phillies lineup, not only for his output, but because he is a right-handed hitter that adds balance. If Brown replaced Werth, the starting lineup could very well be all lefties from the third spot to the sixth spot. Four straight lefty hitters is virtually unheard of for an everyday lineup, and doesn't bode well for the offense, with pitching match ups in mind, when relievers enter the equation later in games.

Since Ibanez went on the disabled list last season, Jayson Werth has performed exceptionally. In 123 regular season games played since June 17th, Werth has a .289 avg, 29 HR and 83 RBI. In other words, by comparison, Ibanez isn't quite performing well enough to be Werth's hype man's hype man.

Jamie Moyer's current contract, which pays him $8 million this season, has received plenty of finger pointing type attention from critics that have looked for reasons why the Phillies didn't keep Cliff Lee for this season. Lee's 2010 salary is $9 million. Raul Ibanez, who is making $12.1 million this year, could potentially be the contract that draws blame if the Phillies choose to not keep Werth.

Although, with Domonic Brown progressing well (.349 avg, 1.062 OPS, through 19 games played at double A level Reading this year), the possibility of having a productive everyday player whose annual salary is the Major League minimum, instead of a number ending in the word million, should be quite appealing to the defending National League champions.

Jay Floyd said…
Famous rapper and actor Common Sense or just a person who claims to have common sense?
May 4, 2010 at 4:08 PM