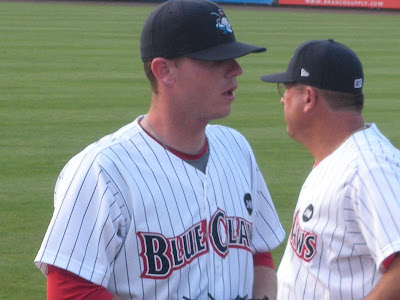 Justin De Fratus
Florida State League all-stars were announced on Friday and there were plenty of familiar names for regular PhoulBallz.com readers. Close friends Justin De Fratus and Travis D'Arnaud will reunite as members of the FSL North division squad. De Fratus and D'Arnaud were key members of the 2009 South Atlantic League champion Lakewood BlueClaws last season. De Fratus posted a 5-6 record with a 3.19 ERA in 36 games (12 starts) for Lakewood in 2009. His battery mate, Travis D'Arnaud, was sent to Toronto by the Phillies in December as part of the Roy Halladay trade, after hitting .256 with 13 homers and 71 RBI for the BlueClaws in 2009. This season with the High-A level Clearwater Threshers, De Fratus, a 22-year-old right hander, has posted a 1-0 record with 8 saves and a 1.64 ERA in 16 games. With Dunedin in 2010, D'Arnaud is hitting .309 with 5 homers and 22 RBI, despite missing over 3 weeks with an injury. 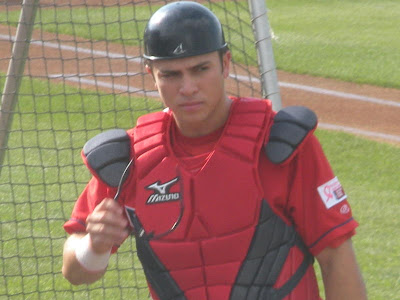 Travis D'Arnaud
In addition to the reunion with D'Arnaud, De Fratus is excited to be teamed up with another pal, Brewers prospect Erik Komatsu, who was once a high school rival of De Fratus in California. Komatsu (.316 avg. in 46 games) has been named to the Northern all-star team as well.

Also chosen to represent the Northern division, in the June 12th all-star exhibition to be played in Viera, Florida, were Clearwater players Austin Hyatt, Trevor May and Cody Overbeck.

Hyatt, a 24-year-old righty pitcher, was the set-up man for Lakewood in the playoffs last year but is now starting for the Threshers. Hyatt has struggled greatly in his most recent three starts, losing 2 games and posting a 15.68 ERA. Prior to that, Hyatt had a 6-1 record and a 1.90 ERA.