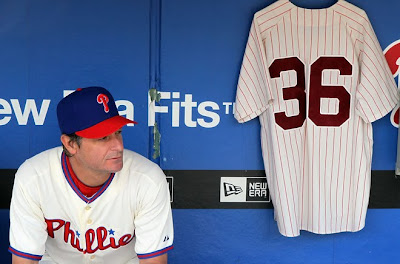 The first place Phillies (24-14) will host the Cubs (18-22) for a brief two-game series, starting Wednesday night. The Cubs sit in third place in the NL Central, 5 1/2 games behind the first place Reds. Last season, the Phillies won 5 of 6 meetings between the two clubs, and 2 of 3 in Philadelphia.
Jamie Moyer, who began his Major League career as a Cub, will take the mound for the Phillies in game one, looking for his 264th career win. Moyer is just 4 homeruns allowed away from tying Phillies Hall of Famer Robin Roberts, who passed away recently, for the all-time lead with 505.
The Cubs arrive in Philadelphia riding a 3 game win streak and will counter with left-hander Tom Gorzelanny in game 1.
Check out all the details on the pitching match ups and other key notes from this series below.