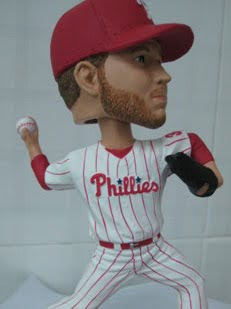 It's Roy Halladay bobblehead figurine day at Citizens Bank Park. Poor weather in the forecast aside, phans all over the area are excited that this giveaway and the Phillies' starting rotation worked out to coincide with each other, as Halladay is scheduled to pitch tonight for the defending National League champs against the Pirates.

Halladay, who is often regarded as one of baseball's best pitchers, will be honored with his first Phillies bobblehead after just 8 regular season appearances with Philadelphia.

This sort of rush service to bestow Halladay souvenirs on the public got me wondering what other souvenirs the Phillies could rush to the public. Here's my list of desired new promotions that should make their way to Citizens Bank Park.


#5 "The Phield" Philadelphia blogger first pitch night. Ceremonial first pitches will start at 2:30 pm for a 7:05 pm game as all Phillies bloggers will be allowed to toss a first pitch to a rotating series of irrelevant former Phillies like Travis Lee, Steve Searcy, Rick White, Antonio Alfonseca and Wilson Valdez. National Anthem could be sung by the Tastykake Choir...which includes PhoulBallz blogger and occasional radio analyst Jay Ballz, as well as Chicks Dig the Long Balls' very own Ryan & Kerri (Ryan more often provides content for Long Drive), who all appear nightly on Phillies broadcasts in all the new Tastykake advertisements.

#4 Large brimmed "Vomit Shield" farmer style hats for all FOP members and their families. Treat your local law enforcement well by ensuring they stay clean, dry and protected from mishaps in the ballpark. This could also coincide with Peco taser night, as all FOP members could receive tasers to control seat neighbors who get out of hand.

#3 Ryan Madson autographed cast night. On the disabled list with limited mobility, Madson has plenty of time to sit around and sign immitation casts for all kids 14-and-under. This could also coincide with padded chair leg night, for safety reasons, of course.

#2 Ben Francisco Stuck to the Bench Figurine. This item does NOT bobble, as Benny Fresh does not move from a seated position often enough to warrant the sponsor to include this type of action in this item.

#1 Mick Billmeyer Bobble Spy. This figurine will be equipped with binoculars and a radio transmission device that the Spy can use to communicate with receivers inside batters' helmets.

Got your own fresh giveaway ideas for the Phillies?...add it in the comments section.