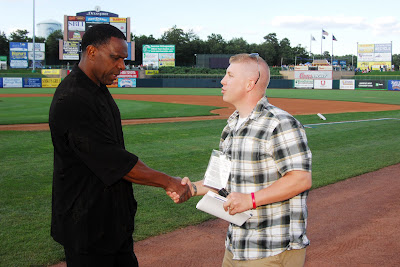 Allow me to reintroduce myself. My name is Jay Floyd. For years I have written on this site under my nickname, Jay Ballz. During my time covering games at the ball parks I have always used my real name, since for some reason nicknames are not welcome or happily included on media credentials.

The name switch was something I wanted to make happen over this off-season. It was urged forward, to sooner rather than later, when I was invited to join the crew of contributors at PhilliesNation.com. I figured there was no better time to make the change than at a time when I would be introduced to thousands of brand new readers at the other site.

My work with PhilliesNation is not expected to change what I do on this site and should serve as a great way to reach new readers and a way to bond with other solid baseball writers and enthusiasts.

To those not familiar with PhilliesNation, it is a solid place for Philadelphia baseball coverage brought to the phans by a collection of writers and led by 97.3 ESPN's anchor/reporter Pat Gallen. The site delivers unique analysis and breaking news, which is why I deemed it a good fit.

As PhoulBallz.com has grown, it has become known for its minor league coverage, as I've brought exclusive stories and interviews from players throughout the Phillies' organization to the public. I will be providing the PhilliesNation audience with the same content.

Thank you readers, for your support to this point. I look forward to continued growth for both sites.