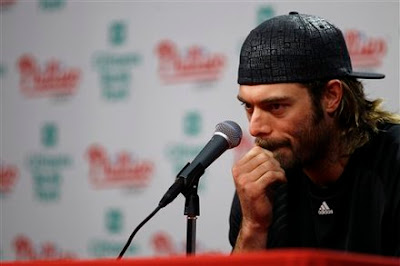 PHILADELPHIA, PA- Speaking of his time in Philadelphia in the past tense at a press conference on Monday, it was clear that Phillies outfielder Jayson Werth feels that his days with the team are through. Although, he would not clearly state any intentions to leave or his potential doubts in the team's commitment to re-sign him, Werth's underlying thoughts bled through in a packed media room at Citizens Bank Park.
Less than 48 hours after the Phillies unexpectedly exited the 2010 postseason, Werth answered dozens of questions regarding his future in baseball.

"It's been quite a ride," Werth stated. "Those (fans) in right field, I'll probably never be in a situation again where it's something like that. I don't foresee that, that's for sure."

Adding what sounded like a goodbye, Werth said, "I definitely had a good time playing here in Philadelphia."

Werth is technically not a free agent until after the World Series is completed. After that, the Phillies will have 5 days to negotiate exclusively with Werth. On the 6th day, he hits the open market.

Fans and media alike have been anticipating a break between the Phillies and Werth following the 2010 season. Impending free agency of a popular player followed by his departure has become a regular occurrence with the Phillies since their string of postseason successes began. In 2008 it was Pat Burrell and in 2009 in was Brett Myers. The Phillies have always "left the door open" for such players to return, even though the inevitable results were clear all along.
Werth deflected an inquiry about whether he thinks returning to the Phillies is realistic. "Realistically speaking....it doesn't really matter what I think right now. It just matters what happens after the World Series. We could sit here and talk about what I'm thinking about all day long, but realistically, none of that matters."