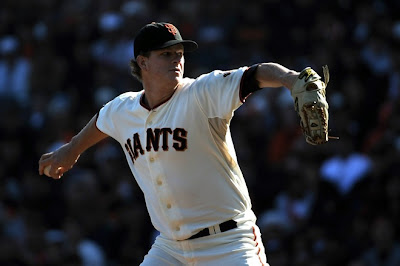 Matt Cain led the way for the Giants to take control of the best-of-seven series, grabbing a 2-1 lead over the Phillies on Tuesday afternoon at AT&T Park. The right-handed Cain held the defending National League champions to just 2 hits over 7 innings and the San Francisco offense was able to squeak 3 runs out of Phillies hurler Cole Hamels.

The Giants got on the board against Hamels in the 4th inning, after he had been perfect through the first 3 innings. As he's done all postseason for the Giants, Cody Ross did some damage and broke the scoreless tie when he smacked a 2 out single to left field that drove home Edgar Renteria, who led off the inning with a base hit. Aubrey Huff then singled to right field, to plate Pat Burrell with the game's 2nd run.

"He plays with no fear," Giants manager Bruce Bochy told the media after the game of Ross. "That’s what you like about the guy."

Ross is now 8-for-23 (.348 avg) this postseason with the Giants, who claimed Ross off waivers from Florida on August 22nd.

In the bottom of the 5th, Hamels was one out away from escaping the frame without further damage, but Chase Utley flubbed a ground ball from Freddy Sanchez. The ball scooted away from Utley, which allowed Aaron Rowand to score and increase the Giants' lead over the Phillies to 3-0.

Cain earned his first career win over Philadelphia in his second career postseason start. Cain retired the first seven Phillies that he faced, before avoiding damage in the 3rd and 4th innings, when he stranded runners in scoring position in each frame.

Bochy, who was concerned over his team's offensive struggles adjusted his lineup. Ross, who batted 8th in game 1 was moved to 5th in the order, while Andres Torres was benched in favor of Rowand.

Phils left-hander Cole Hamels took the loss, while striking out 8 batters and allowing 3 runs and 5 hits over 6 innings.

The Giants now sit two wins away from the World Series. The team has not won a championship since they moved to San Francisco in 1958.

Phillies righty Joe Blanton, who has pitched just 1 inning since September 29th, will face rookie left-hander in game 4 on Wednesday evening at 7:57pm.