Oswalt and Rollins Shine as Phils Pull Even 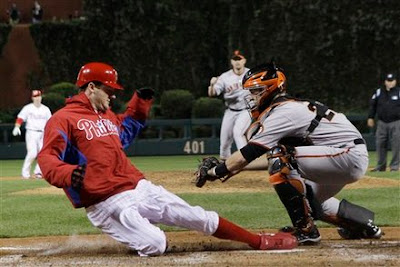 PHILADELPHIA- Productive outs were something the Phillies lacked in the National League Championship Series opener against the Giants on Saturday night. With strike outs in key spots, the Phillies came up short by a run and San Francisco took a 1-0 series lead. Game 2 was not the same case, as moving runners over and the underrated baseball aspect known as the sacrifice fly came into play, and helped the Phillies tie the series against the Giants at 1 game each.

The Phillies got the scoring started in the bottom of the opening frame against Giants starting pitcher Jonathan Sanchez, in support of their own starter Roy Oswalt, when Chase Utley scored on a bases loaded walk to Jimmy Rollins.

Ross has had tremendous success at Philadelphia's Citizens Bank Park in his career. In 35 games played at CBP, Ross has slugged 10 homeruns. The only park in which he has hit more is at Florida's Sun Life Stadium, which he called home when he played with the Marlins. Ross has 38 homers in 289 career games played at Sun Life.

The Phils responded quickly in the bottom of the 5th inning. Shane Victorino led off with a double. Utley then flied out to right field, to advance Victorino over to third base. Placido Polanco then brought home the go-ahead run when he drove a sacrifice fly to center field to put the Phillies ahead 2-1.

Roy Oswalt was strong throughout the contest as he struck out 9 Giants, while allowing just 3 hits and 3 walks to the Giants over 8 innings. However, his base running may end up being the memory that stands out in most people's minds. After he singled, while using a bat that belonged Jimmy Rollins in the bottom of the 7th, and moved up to 2nd base when Utley was intentionally walked, Oswalt ran through a stop sign from third base coach Sam Perlozzo while turning wide and glancing back over his own shoulder. A slick slide ahead of the relay throw resulted in the 3rd Phillies run, putting the defending National League champions up by 2.

Of his not-so-smooth baserunning, Oswalt told the media, "First thing in my mind was score. When I got halfway, I saw the stop sign. I said, 'It’s too late now. No turning back!'"

Giants reliever Santiago Casilla entered the game with a bases loaded jam later in the 7th inning. Jimmy Rollins greeted him by sending a deep drive to right-center field that hit high off the wall and cleared the bases. The double gave the Phillies a 6-1 lead that they would not relinquish.

"Sometimes you put a good swing on the ball, it finds the gap and everything looks fantastic," Rollins, who finished the game with 2 hits in 3 chances and 4 RBI, stated. "Hopefully I can take what I did today and keep it going."