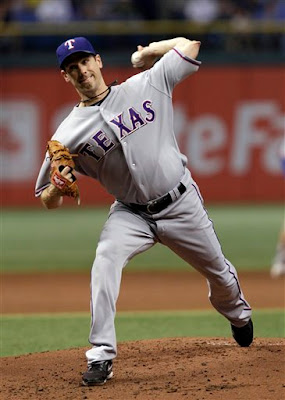 With the Texas Rangers' first ever postseason series victory on Tuesday night, both League Championship Series schedules are set. The Rangers, led by Cliff Lee's 11 strike out complete game effort and Ian Kinsler's 3rd homerun of the series, beat the Tampa Bay Rays 5-1 in the series' 5th game. Texas moves on to play the New York Yankees in the best-of-seven American League Championship series that begins on Friday.
Cliff Lee, of course, was a member of the Philadelphia Phillies team that reached the World Series against the Yankees last year. Lee won both of his starts against New York in that series. With his outstanding effort in the ALDS, Lee has improved to 6-0 with a 1.44 ERA and a .185 batting average against in 7 career postseason starts.

The Senior Circuit will feature the San Francisco Giants and the Phillies battling it out for the pennant. The big talk surrounding the National League Championship Series is the match up of exceptional pitching staffs. The Phillies' big three of Roy Halladay, Roy Oswalt and Cole Hamels will be pitted against the Giants' rotation that includes Tim Lincecum, Matt Cain and Jonathan Sanchez.

Schedules for the League Championship Series look like this...

mvr joe said…
i see an edge for the phils in the pitching stats....of course i didn't need to see the stats to know that, but thanks for breaking it down mr ballz
October 13, 2010 at 12:59 PM