By Jay Floyd October 13, 2010
The Phillies played a simulated game on Tuesday, in which Joe Blanton started. Blanton threw roughly 60 pitches against the Phillies regular lineup. The fact that Blanton saw a considerable amount of action on the mound could be telling that the team wishes for him to be ready to start game 4 of the National League Championship Series in San Francisco. However, the series results could decide Blanton's status. If the Phillies trail after 3 games, it could be deemed necessary to use presumed game 1 starter Roy Halladay on short rest in game 4.

Manager Charlie Manuel announced on Tuesday that the team would be off on Wednesday, then return to Citizens Bank Park for a workout on Thursday at 1pm. A schedule has not been announced for Friday as of yet, as both the Giants and Phillies will work out at CBP that day. 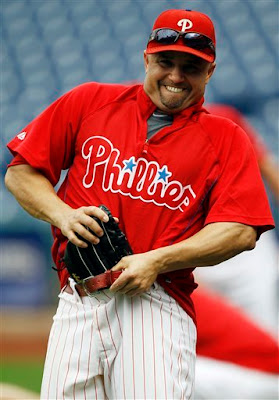 Placido Polanco was seen at practice on Tuesday using a unique method to hide Raul Ibanez's mitt. What else does he have in there? 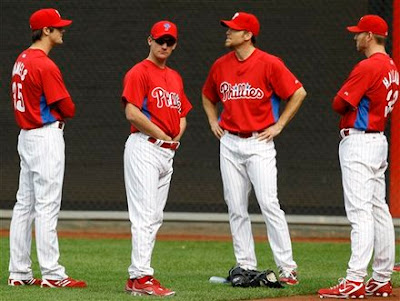