Each season around this time, PhoulBallz.com calls upon some phriends to predict the winners of the upcoming playoffs. I surveyed a few local sports radio hosts, some popular baseball bloggers and, appropriately for the playoffs, a couple Wild Cards.


Check out what each of us had to say about all the upcoming playoff action, as each panelist attempted to predict all of the winners and the Most Valuable Players for the League Championship Series as well as the World Series.

ALDS- Rays vs. Rangers
Tyrone Johnson- Rangers in 5. Superior pitching will guide Texas to the League Championship series.
Fightins Chris- Rays in 4.
Bill Baer- The Rays take down Cliff Lee's Rangers in 4 games.
Mike McGuire- Rays are good enough to get past Rangers.
Greg Giombarrese- Tampa wins over Texas in 4.
The Blue Meanie- Rangers will knock the Rays out of the playoffs.
Joe Giglio- Rays take down the Rangers in 5 games.
Jay Ballz- Rays stay hot against other divisions (.653 winning % against non-AL East opponents) and advance to the ALCS.
Mike Krenek- Rangers win it in 5 games.
1BJW Dick- I think Tampa needs all five against Texas, but wins it.

Only 3 chose the Rangers.

NLDS- Phillies vs. Reds
Tyrone- Phils in 3. These Phillies are on a roll & won't lose.
Chris- Phillies sweep. No questions asked.
Bill- Phillies in 4.
Mike M- Easy call...Phillies.
Greg G- Phillies are too much for Reds, win in 3.
Meanie- Phillies top the Reds.
Joe G- Phillies advance in 3 games. Sweep!
Jay- The Phillies have won the division series in 4 games in each of the past 2 years. Why change now? Phils in 4.
Mike- Phils sweep Reds. They are too tough.
Dick- Phillies over the Reds in 4, with Doc getting 2 CG victories.

Phillies are a unanimous choice.

ALCS...
Tyrone- Yankees in 7. The Yankees will be too tough for these young Rangers, although Cliff Lee will win 2 games in the series. ALCS MVP - Curtis Granderson.
Chris- Twins in 7. Jason Kubel is series MVP.
Bill- Twins over Rays. Francisco Liriano wins the ALCS MVP award.
Mike M- Yankees win, led by CC Sabathia, who wins ALCS Most Valuable Player.
Greg G- Rays over Twins in 6 games, with Evan Longoria winning the LCS MVP.
Meanie- Rangers take out the Twins.
Joe G- Yankees over Rays in 7 games...Granderson wins the MVP.
Jay- Tough call. Rays & Yankees have battled all season long, but Mariano Rivera will be the difference and winner of the ALCS MVP. Yankees in 7.
Mike- Yankees win over the Rangers in 6. Mariano Rivera is the MVP of the ALCS.
Dick- I'll take Tampa over the Yanks in the ALCS with the MVP going to Carl Crawford. It will take 6 games. I think the Rays will run on Posada at will.

Tampa and Minnesota get 2 picks each, while the Rangers were chosen once. The Yankees were named the American League champs by 5 clairvoyant baseball minds.

NLCS...
Tyrone- Phillies in 5. The Giants have excellent pitching but the Phillies' pitching is better. Phillies could win 3 games 1-0 if need be. NLCS MVP - Chase Utley.
Chris- Phillies take down Giants in 6 games. Halladay is the series MVP.
Bill- Phillies beat Giants, led by Chase Utley, who wins the NLCS MVP.
Mike M- Chase Utley leads the Phillies past San Francisco and wins MVP.
Greg G- Phillies defeat Giants in 5 games, with Roy Halladay being named as series MVP.
Meanie- Phillies keep doing what they've been doing...beat the Braves. Halladay for MVP.
Joe G- Phillies over Giants in 6 games. MVP is Carlos Ruiz.
Jay- Phillies pound the Braves, in 5 games. Ryan Howard wins his 2nd NLCS MVP with a load of RBI.
Mike K- Phillies win over Giants in 5. Carlos Ruiz wins LCS MVP and gets some ice cream.
Dick- NLCS will take all 7. I gotta give it to the Phillies because of those bats and experience. I think Howard carries the team and gets the MVP.

The Phillies are the 10-for-10 choice once again.

That is 9 out of 10 contributors taking the Phillies to win it all this year. As a bonus, I did receive one response that skipped all the bracketology of the MLB postseason and jumped right to the end. He's not a baseball expert, but famous hip hop artist Joe Scudda chimed in via Twitter to let me know that the Braves will win it all this year. When I replied to inquire which team he thought would represent the American League in the World Series, Joe delivered this retort, "No clue, Braves win!" Mr. Scudda may not offer deep analysis or have a popular opinion around these parts, but his music is still quite hot, so check out his website and sample his efforts HERE.

You can also check out the solid programming from 97.3 ESPN online by clicking HERE. 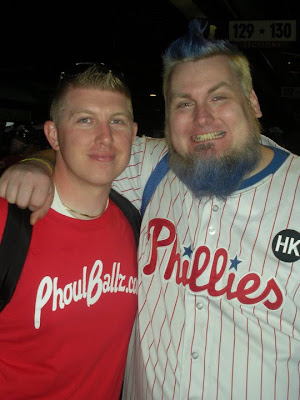 Jay Ballz & The Blue Meanie at the 2010 Phillies Phestival

Jay Floyd said…
The only thing better than Meanie in a Phillies jersey might be Charlie Manuel in a BWO shirt!
October 6, 2010 at 3:15 PM