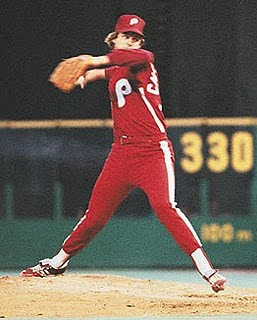 Larry "LC" Christenson was a pitcher with the Phillies from 1973-1983. The right-handed Washington State native spent his entire career pitching for Philadelphia after being drafted by the Phils as the 3rd overall pick in the 1972 amateur draft.

In his Major League debut on April 13, 1973, at age 19, Christenson hurled a complete game against the Metropolitans and came within 1 out of a shutout, until he tossed a wild pitch that plated New York's only run of the game. The Phillies won 7-1, earning Christenson his first big league victory, but much to the surprise of everyone, it would be LC's only win of the season. Christenson started just 8 more games for the Phillies that in 1973, before he was demoted back to the minors by June. The following off-season, Christenson would have elbow surgery to repair a nagging injury.

By 1975, Christenson worked his way back to the Phillies' starting rotation. That season he won 11 games and posted a 3.67 ERA. He hurled 2 shutouts in his 26 starts that year.

Despite experiencing back trouble in 1976, LC won 13 games and cruised to a 3.68 ERA in 32 games. Christenson also proved to be one who could make an impact at the plate, when he smacked 2 homers in a single game against New York in September of that season.

The following year, Christenson got off to a poor start, winning only 4 of his first 11 outings, but turned the 1977 season around to be the best of his career. Starting in June, Christenson got locked in and became the club's most consistent starter, stringing together 14 consecutive starts without a loss. To top it off, Christenson won 7 starts in the final month of the season to help the Phillies win a second straight division title. LC would finish the season with a 19-6 record and would go on to produce just 1 winning season in his final 6 years in the big leagues.

Going forward, Christenson would experience a rash of injuries. In 1979, he missed much of the season with a broken collar bone he suffered during a charity bike ride. In 1980, he was sidelined by 2 separate groin injuries and was limited to just 14 starts. Christenson started game 4 of the World Series that year, but lasted only 1/3 of an inning, while letting up 4 runs. Off-season elbow surgery following his 1982 campaign limited him to 9 games in 1983 before the Phillies released him after the World Series. Christenson's playing days were done, at the age of 29.

Christenson is tied with Rick Wise as the all-time Phillies leader in homeruns by a pitcher at 11. He lives in the Philadelphia area with his family and remains his ties with the Phillies through charity work.