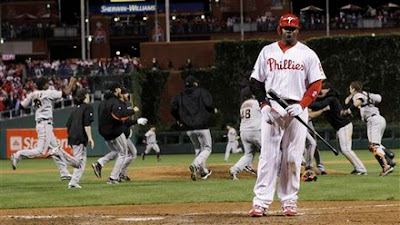 Their phans had high hopes. And why wouldn't they? It's just about habit by now. Four straight division titles and what was supposed to be a third consecutive World Series berth are enough to spoil people and ensure that any result shy of another world title will be a disappointment.
In game 6 of the National League Championship Series the Phillies had loads of opportunities to take control of the game and put the San Francisco Giants away to force Philadelphia's very first postseason game 7. Unfortunately, the Phils blew those chances and lost to a team that was widely considered inferior.
In the 3rd inning, after the Giants had tied the game at 2, the Phillies' first two batters reached base when Placido Polanco walked and Chase Utley was hit by a pitch. On his way to first base, Utley tossed the ball back toward the pitchers mound, which resulted in some insults being fired from San Francisco starter Jonathan Sanchez. Tempers flaired, the benches cleared, but no punches were thrown. It seemed as though the encounter had a negative effect on the Phillies instead of firing them up. With manager Bruce Bochy's short leash, Sanchez was then relieved by Jeremy Affeldt who retired Ryan Howard, Jayson Werth and Shane Victorino in order on a strike out, a fly out and a ground out respectively.
In the 5th inning, Jim Rollins led off with a single. Following fly outs by Polanco and Utley, Ryan Howard doubled, but Rollins was held at 3rd base, despite running on contact with 2 outs. Werth was then intentionally walked before Victorino again made the 3rd out with runners in scoring position.
In the 6th inning, Raul Ibanez led off with a double and was promptly bunted over to 3rd base on a sacrifice bunt by Carlos Ruiz. Ben Francisco then struck out looking and Jimmy Rollins flied out.
In the 8th inning, following the Giants taking the lead on a solo homer by Juan Uribe, against Tim Lincecum in relief for just the 2nd time in his career, Victorino and Ibanez laced back-to-back one-out singles. But Brian Wilson then relieved Lincecum and got Carlos Ruiz to line out to first baseman Aubrey Huff who doubled Victorino off of second by firing the ball to shortstop Edgar Renteria.
In the 9th inning, Jimmy Rollins walked with 1 out but was erased on a fielders choice hit by Polanco. Utley then walked and Wilson Valdez ran for Polanco. With 2 down, 2 on and a full count, Howard looked at a called third strike and 8 months of high hopes were shot down.
The game 6 shortcomings were typical of the Phillies' overall offensive output during the NLCS, although the scoring totals for the series favored the Phillies by 1 (20-19) over the Giants.
Going forward, the Phillies will have until spring training 2011 to reflect on the ways their bats let them down in crucial postseason games and perhaps some adjustments to make to the team so these mishaps don't prevail in the future.
__________________________________________________________
For updates, facts and stats, follow PhoulBallz.com on Twitter by clicking HERE.