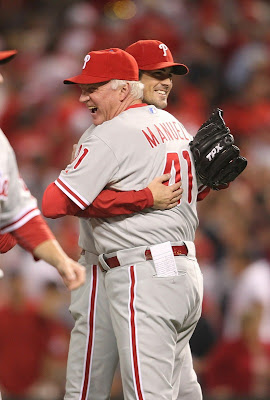 The series that pitted the widely feared trio of Phillies starting pitchers against the National League's top offensive lineup, the Cincinnati Reds, ended in quick fashion. The pitchers, who had posted a 13-1 record with a 2.13 ERA since the start of September came out and shut down the offense that led the league in batting average (.272), homeruns (188) and RBI (761) over the full regular season.

On Sunday night, Cole Hamels threw an impressive 5-hit complete game shut out, in which he struck out 9 Reds, leading the Phillies to a sweep in the best-of-five divisional round of the MLB playoffs, in Cincinnati.

After the series clincher that locked Philadelphia into their franchise record third consecutive National League Championship Series, the Phillies had a bit of a reserved celebration. There were no dog piles on the field, only some tame champagne spraying in the clubhouse, as the Phillies are aware there are still more steps to climb until they reach their goal, which is, of course, the World Championship.

"This moment here is just another stepping stone to trying to win another World Series," Hamels told the media after his masterful effort. The Phillies won the World Series in 2008, led by Hamels, who was named series Most Valuable Player.

Phillies ace Roy Halladay, who threw the second no-hitter in MLB postseason history in the series opener stated, "For everybody here, the ultimate goal is to get to the World Series. This is the first step. We’re all looking to get to the end."

The Reds were held to all-time division series lows with a .124 batting average and a .160 on-base percentage in the 3 games. The Reds managed just 11 hits against Phillies pitchers in the NLDS. Cincinnati, also regarded as an excellent defensive team, made a stunning 7 errors in the series against the Phillies.

The Phillies won the deciding game 2-0 and got a key run on a solo homer from Chase Utley in the 5th inning. Philadelphia's other run came in the opening frame when Placido Polanco scored when Reds shortstop Orlando Cabrera commited a throwing error on a grounder hit by Jayson Werth. The series win for the Phillies marks their first ever sweep in the postseason.

Philadelphia will host either the Atlanta Braves or the San Francsico Giants in a best-of-seven series beginning Saturday. The Giants defeated the Braves 3-2 on Sunday to take a 2-1 lead in their best-of-five divisional series.