By Jay Floyd October 05, 2010
The United States' Pan American qualifying team is on a roll down in Puerto Rico. In 3 games of tournament action, Team USA is undefeated and has outscored their opponents 34-10. The top 8 squads in the 13-team tournament advance to the 2011 Pan American Games, while the team that finish in the top 6 also qualify for the 2011 International Baseball Federation World Cup.

USA's offense and pitching have been equally impressive in the early going. Combined, Team USA batters have posted a .393 batting average with 10 doubles, 3 triples, 4 homeruns and 31 RBI. Team USA pitchers have held opposing batters to a .193 batting average, have struck out 26 batters and allowed 4 walks and 5 earned runs in 25 innings. 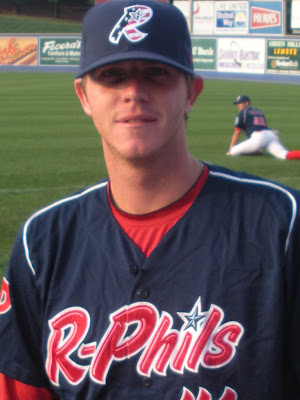 Justin De Fratus is the only Phillies prospect on Team USA. De Fratus, a right-handed reliever, has pitched just 1 1/3 innings, in which he allowed 1 unearned run in play thus far. In 49 games between High A level Clearwater and Double A level Reading this season, De Fratus posted a 3-0 record with 21 saves and a 1.94 ERA, while striking out 71 and walking just 11 batters in 65 innings pitched.

De Fratus, who will turn 23-years-old later this month, values the opportunity to represent his country and to gain experience playing beside individuals who are highly regarded prospects in their own organizations, including 4 players who participated in the MLB All-star Futures Game this year. "It's really (great) to be representing America. The guys are really cool. We have a good group that seems to be meshing really well together. Plus, they're all legit players," De Fratus told PhoulBallz.com exclusively this week.

Other Phillies prospects playing in the Pan American qualifying tournament are 20-year-old Julio Rodriguez on Team Puerto Rico, as well as 21-year-old Phillipe Aumont and 25-year-old Chris Kissock, who are both on Team Canada. All three are right-handed pitchers.

Team USA is back in action Tuesday evening at Roberto Clemente Stadium in Carolina, Puerto Rico against the Dominican Republic.

For unique stats, info and updates...follow PhoulBallz.com on Twitter by clicking HERE.