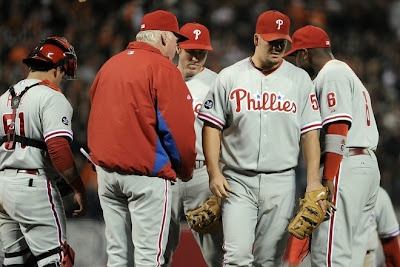 Clutch doubles, an outfield assist, solid bullpen pitching, a big game from rookie phenom Buster Posey and questionable moves with the Phillies' pitching staff all added up to a win and a 3-1 series lead for the NL West champions when game 4 of the National League Championship Series was done.

At San Francisco's AT&T Park on Wednesday evening, the Giants plugged away, scoring in 5 different innings. They got on the board in the 1st, when the 23-year-old Posey drove home Freddy Sanchez with a single to centerfield. Posey then slapped a double in the 3rd inning, to plate Aubrey Huff and put San Francisco up 2-0.

The Phillies got some offense of their own rolling in the 5th inning when Ben Francisco and Carlos Ruiz got the team's first back-to-back hits of the series. Shane Victorino then stepped in and slapped a single to center that drove home Francisco, but Aaron Rowand gunned down Ruiz at home plate for an out. Chase Utley then singled. Placido Polanco stepped up and doubled off of Giants reliever Santiago Casilla. Later in the inning, Polanco scored on a wild pitch and the Phillies led 4-2.

In the bottom of the 5th, San Francisco drew close when Aubrey Huff knocked in Andres Torres with a single off of Joe Blanton. The next inning, reliever Chad Durbin served up a 2-run double to Pablo Sandoval that gave the Giants a 5-4 lead.

Philadelphia tied the game in the 8th inning, when Jayson Werth doubled to drive home Ryan Howard with no outs, but the Phils couldn't bring Werth around and he was left stranded on 2nd base, setting the stage for 9th inning walk-off style fun for the Giants.

Phillies manager Charlie Manuel chose to use starter Roy Oswalt in relief for the 9th inning, but the move backfired as Oswalt gave up the winning run when Aubrey Huff laced a 1-out single, and Posey delivered his 4th hit of the game, moving Huff to 3rd base. Juan Uribe then drove a fly ball to left field that enabled Huff to tag up and score to end the game with 2 outs in the final frame.

Manuel and Dubee elected to start Joe Blanton in what turned out to be the biggest game of postseason to date. If the choice to not use Roy Halladay, the top guy in the Phillies pitching rotation, was the proper call, then why give Blanton an early hook? If the coaches were confident enough in Blanton to give him the starting nod, he should have been good enough to complete the 5th frame and possibly pitch beyond that. Blanton still had a lead and merely had a runner on 1st base with 2 outs when he was pulled from the game. That is not a particularly tight jam at all.

Removing Blanton from the game in the 5th, after just 65 pitches, pushed up all the available pitchers and potentially left the Phillies short-handed late in the contest.

Oswalt, who pitched 8 innings in the second game of the series on Sunday, shouldn't be blamed for the loss, even though he was charged with it. Oswalt had gone to pitching coach Rich Dubee in the 8th inning, to make it clear that he could pitch, as it was his scheduled day to throw a bullpen session on the side. Oswalt wanted to do whatever he could do to help the team win.
Just as hindsight will force phans to wonder what could have happened if Roy Halladay started game 4 on short rest, they will also wonder what could have occurred if Blanton was allowed to continue, or if the leash with Chad Durbin had been shorter, or if Oswalt hadn't spoken up to Dubee.

Additionally, the Phillies still had JC Romero, Kyle Kendrick and Brad Lidge ready out of the 'pen, if needed. So while Oswalt gave up the winning run, it was likely mismanagement of the pitching staff that lost game 4 for the Phillies and left them 1 loss from elimination in the 2010 postseason.