By Jay Floyd October 09, 2010
A year to the day after they lost game 2 of the NLDS against the Rockies, the Phillies ended their losing streak in postseason series game 2's at 4. Thanks to some lucky calls, and some Reds miscues, the Phillies were able to walk away with a 7-4 victory on Friday night.

In the 6th inning, with the Reds leading the Phillies by 2 runs, a pair of hit batters and a bases loaded walk to Shane Victorino closed the gap to 1.

Then in the 7th inning, things really just fell apart for the Central Division champion Reds. With rookie phenom Aroldis Chapman and his 100+mph fastball on the mound, a high an inside pitch was sold by Chase Utley, as he immediately put his head down and took off for 1st base, and ruled a hit by pitch by the home plate umpire Bruce Dreckman.

Ryan Howard followed Utley and struck out. Jayson Werth then batted, lacing a chopper toward Reds third baseman Scott Rolen, who chose to attempt the more difficult play to get Utley out at 2nd base. Utley was ruled safe by umpire Ed Rapuano, although replays later showed that call was likely incorrect.

Jimmy Rollins then stepped up to bat righty against the left-handed Chapman. Rollins would slap a sinking liner toward right field that stayed in the stadium lights from right fielder Jay Bruce's view point. Bruce who was unable to make the play. The ball was chased down by center fielder Drew Stubbs, who dropped the ball before he could relay a throw home. As a result, Utley and Werth both scored, giving the Phillies a lead they would not let up. 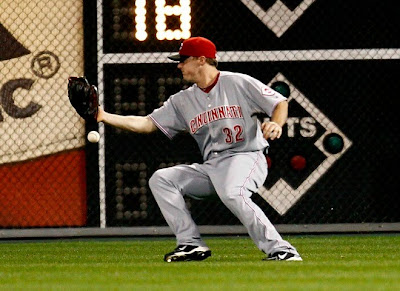 Jose Contreras earned the win and Brad Lidge recorded his 11th consecutive postseason save, the 2nd longest streak of all time, behind Mariano Rivera's 23.

With a 2-0 lead in the series, and Cole Hamels, who is 6-0 with a 1.07 ERA in 7 career games against Cincinnati, the Reds are certainly in a difficult position. If the Phillies win game 3 and sweep the NLDS, Philadelphia would not play again until next Saturday, the 16th, at home against either the Giants or the Braves.


I'll be on 97.3 ESPN's Weekend Sports Guide today talking Phillies playoffs. Tune in on the air or live online! Click HERE for the web stream.