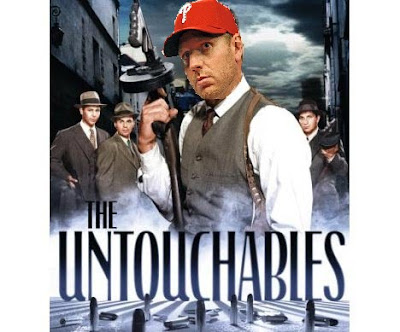 In the opening game of the 2010 National League Division Series, Phillies ace Roy Halladay threw the second no-hitter in MLB post-season history, to lead his club past the Cincinnati Reds, 4-0.

Way back on October 8th, 1956, the Yankees' Don Larsen threw a perfect game in the World series against the Dodgers.

On Wednesday, Halladay threw 9 hitless innings, striking out 8 batters, with 104 pitches...79 of which were strikes, against the National League's most potent offense. As a team, Cincinnati led the league in batting average (.272), HR (188) and RBI (761) during the regular season. It was the second time Halladay held a team hitless this year, as he hurled a perfect game against the Marlins in Florida on May 29th.

Halladay even contributed to the Phillies' victory with his bat, driving in a run with an RBI single in the 2nd inning, off of Reds starting pitcher Edinson Volquez.

The excitement level for Halladay's tremendous effort spread beyond the Delaware Valley. The final outs of Halladay's no-hitter were displayed on the video board at Minnesota's Target Field, as the Twins and Yankees prepared to start their American League Division Series.

After the game, Halladay described the event as "a dream come true". Many phans would agree. It wasn't too long ago that the Phillies tried to get by with moderately desirable pitchers. The only top level pitchers' names tied to the Phillies in trades were being sent away by the Phils. They'd make moves, adding middle tier names like Turk or Cory around the trading deadline. That is no longer the case, as Philadelphia has become the home of a baseball contender...a place where elite talents want to play. These days, the Phillies add names such as Roy and...Roy again.

"This is what you come here for," Halladay told the media following his first ever MLB playoff appearance on Wednesday. "This team- they know how to win. It’s been a great year, a fun year. We have a ways to go."

Now, it'll be the other Roy's turn, as Roy Oswalt will take the mound and try to keep the momentum going for the Phillies in game 2 on Friday.