One For the Books...

By Jay Floyd August 25, 2010
It was surely a wild one that thousands of phans will remember for years and will still be talking about when Tuesday night's losing pitcher David Herndon's full head of dark hair resembles former Phillies reliever Larry Andersen's less than full head of greying locks. 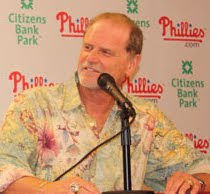 Another solid start by Cole Hamels (7 innings, 2 ER, 8 K, 1 BB) set the stage for some 9th inning heroics, when Jimmy Rollins slugged a solo homerun to deep right field that tied the game at 2 and sent things to extra innings.

The bullpens battled it out, keeping the game locked well past midnight.

Ryan Howard capped off the worst game of his career in the bottom of the 14th inning when, with the Phillies having used all their bench players and down to their last relief pitcher, Howard got ejected after he was rung up for his 5th strike out of the night by fill-in umpire Scott Barry. Howard had already stood with his hands on his hips after a check swing was called a strike by the third base ump, Barry, earlier in the at bat. Barry retaliated by doing the same back to Howard. Howard could be seen on television telling the home plate Greg Gibson that Howard was only mad at himself. Later in the at bat, Barry called the 3rd strike and Howard threw his bat away. Barry immediately threw Howard out of the game, at which time Howard charged Barry and was restrained by teammates, coaches and another umpire, Sam Holbrook.

Ross Gload, who is currently on the disabled list, was also ejected from the game for arguing. Both Gload and Howard could face further disciplinary action.

Howard, who has struck out 18 times in 8 games since his last extra base hit, let his team down with his performance and with his inability to keep his temper in check.

With no offensive substitution options left and the Phillies in a tight spot, Howard completed possibly the worst game a Phillies hitter has ever had...0-for-7 with 5 strike outs, and forcing the Phils to use a starting pitcher, Roy Oswalt, in left field while Raul Ibanez was used to fill Howard's void at first base.

In the 16th inning, the righty Herndon gave up two runs, when Raul Ibanez was unable to handle a throw that could have ended the inning with just 1 run scoring. 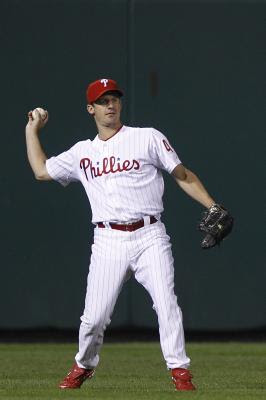 Oswalt stepped to the plate in the bottom of the 16th, with two runners on, in the spot vacated by Howard. Oswalt grounded out to third base, locking down a 4-2 loss for the Phillies, who are now tied for the NL wild card lead with San Francisco, who beat the Reds on Tuesday night.

Audio of the aforementioned Andersen's remarkable radio rant that followed the Howard mishap can be heard in the media player below.