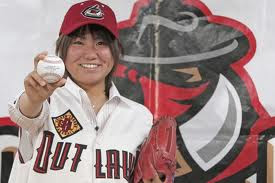 Sprinkled with former big leaguers and career minor leaguers striving to be recognized by a Major League organization, the attention of fans and media, regarding the Golden Baseball League, seems to be focused on the league's 18-year-old female pitcher. Eri Yoshida's knuckleball got her recognized at age 16 and allowed her to become the first female drafted by a Japanese professional baseball team. Just a couple years later, Yoshida is a professional pitcher in North America.

Plenty of hype surrounded the teenager, after she pitched in 11 games last year for the Kobe Cruise 9 and later earned a victory for Yuma in the Arizona Winter League. Yoshida signed with Chico, of the Golden Baseball League, in April this year and made her debut as an Outlaw in May.

Since then, batters in the independent league have figured out Yoshida's deceptive style. In 3 outings from July 23rd-August 1st, Yoshida allowed no fewer than 6 earned runs each time out. Making her first road start for Chico, Yoshida walked 7 batters in 2 1/3 innings in a recent outing against Victoria. The appearance against Victoria, in British Columbia Canada, made Yoshida the first female to pitch professionally in 3 countries.

Despite the rough stretch this summer, Yoshida, nicknamed "The Knuckle Princess", donated the jersey she wore and the bat she used to the National Baseball Hall of Fame, to be included in a "What's Happening Now in Baseball" display. The items share a case with the cap that Washington Nationals pitcher Stephen Strasburg wore in his Major League debut in June.

Still looking for her first GBL victory, Yoshida, who stands 5-feet-1-inch tall, has posted a 0-3 record with a 12.68 ERA through 7 games with Chico. A starter, Yoshida has lasted 5 innings only once this season. The Outlaws' pitching staff only has 3 pitchers with ERA's over 4.37 and Yoshida's ERA is nearly 5 runs higher than her next closest teammate.

I recently spoke with manager of the Philadelphia Phillies' Single A affiliate, former Major League catcher, Mark Parent, who previously managed the Outlaws, about Chico's lady hurler. Parent wasn't very familiar with Yoshida, but is friends with current Chico manager, Garry Templeton, another former Major Leaguer, and offered up some pity for his pal. "That must be a head ache," Parent said of the circus atmosphere that goes along with having a female pitcher at the professional level.

Many would be hard pressed to not admit Yoshida's presence on the Outlaws pitching staff is not a gimmick to help draw attention to the team and increase attendance. Nettleton Stadium, the Outlaws' home park, was filled nearly to its capacity of 4,200 for Yoshida's debut, which is roughly twice the typical Chico attendance figure. The team and its league are surely receiving more attention because of Yoshida's presence than they have at any other time. No wonder the Outlaws announced 10 days in advance, on Tuesday, that Yoshida is slated to make her next start on August 20th.

Efforts to exploit a situation aside, there's surely nothing wrong with giving someone a chance. However, when a carnival act proves costly by hurting the team's chances of winning and keeps a more deserving player from receiving a chance to shine, perhaps the plug should be pulled on the princess' opportunity.