By Jay Floyd August 30, 2010
Mike Sweeney is the new guy. A part time player. He's been a Phillie for just a few weeks, but with his steadily jovial outlook, his appreciation of the sport, and his seemingly instant devotion to the City of Brotherly Love, Sweeney has already won over more phans than Tad Iguchi did when he was acquired to fill a void in 2007 and helped the Phillies advance to their first post-season in 14 years. Sweeney is also on the fast track to being the next Matt Stairs, who hit a landmark homerun in team history in the 2008 playoffs against the Dodgers and helped the Phils lock down just their second World Championship ever, in relation to approval of the Phillies phaithful.

The newest Phillie respects the uniform, plays hard and he is affectionate. What more could a phan ask for? 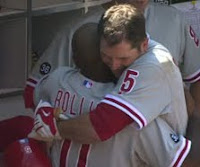 On Sunday, Sweeney slugged his first homer as a Phillie, helping to lock down a series sweep against the Padres in San Diego. Those who caught the game telecast witnessed Sweeney celebrating afterward by dishing out hugs to teammates and coaches.

After the game, Sweeney spoke with "Sarge" Matthews, on MyPHL 17. Check out the media player below to listen to some excerpts from that interview.