Mintken Back With Lakewood, Anticipating Repeat 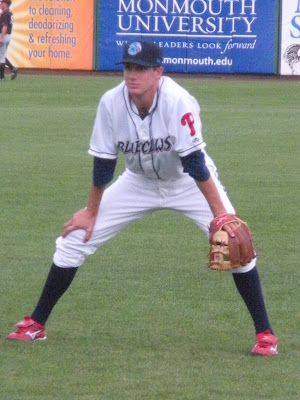 LAKEWOOD, NJ- It's been a long season for Korby Mintken. The 24-year-old prospect, who was signed as a non-drafted free agent out of South Dakota State University, struggled through four months in Class High A Clearwater this year, posting a .203 batting average that earned him sparse playing time.
Last week, the Phillies demoted Mintken to Lakewood, where the organization felt he could be a contributor for the remainder of the season.

A versatile fielder, Mintken has played 2nd base, shortstop, 3rd base and the outfield at the professional level.

Mintken spent last season with Lakewood, helping the BlueClaws lock down a South Atlantic League Championship, the second in team history. Now that he's back, and Lakewood is returning to the playoffs, after clinching the berth with the first half division title, Mintken is excited for the opportunity to repeat as champion. "(I'm) excited to be a part of this team and maybe get another ring," Mintken told PhoulBallz.com in an exclusive interview.

"There are a bunch of new faces here since last year. Looks like they can play some ball. Everyone's anticipating the post-season, so I can't wait for it."

Production has picked up for Mintken since returning to Lakewood, as he has posted a .438 on base percentage in 8 games. Mintken has reached base safely, via hit or walk, in 7 of those 8 game thus far.

Mintken, a left-handed hitter, feels that the move to Lakewood will be beneficial to his progress, as he plans to work closely with his new manager, former Major League catcher Mark Parent. "(Parent) brings a lot of positive energy. He knows what he's talking about. He has a lot of time in baseball...the Major Leagues especially. Hopefully, I'll learn a lot from him."

Parent was pleased to receive the news that the adroit Mintken was being reassigned to Lakewood. In fact, Parent had inquired with the organization about the possibility of Korby joining the BlueClaws. "He deserves the chance to play a little bit and wasn't getting to play that much (with Clearwater)."

Parent has been open about expressing his desire to put the best club possible on the field for the playoffs, including recent statements that, for selfish reasons, he hoped top prospect Trevor May would remain with the team, when a spot became vacant in the Clearwater pitching rotation. Parent has gotten his wishes granted, as May stuck around and Mintken arrived in time to gel with his teammates before the post-season gets rolling in a couple weeks.

Mintken feels the Lakewood fans played a big role in the team's title run last year. "There's just great energy from the crowd," Mintken said. "(There are) so many smart baseball fans in this area that love to see their players do well, so that helps us strive for more."

Playoffs begin Wednesday, September 8th. Lakewood's first home playoff game is on Friday, September 10th. The BlueClaws' first round opponent has not yet been determined.