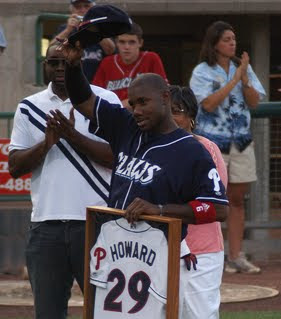 LAKEWOOD, NJ- On a night when the BlueClaws retired Ryan Howard's jersey and Howard set the franchise RBI record, the visiting Greensboro Grasshoppers weren't very accommodating.
Howard was there to test his recovering sprained left ankle and knock off any rust. Greensboro lefty pitcher Chad James wasn't budging, as he walked Howard in his first plate appearance. The Grasshoppers them employed a fielding shift for the slugger in his second at bat, forcing Howard to ground to the second baseman, positioned in shallow right field.
The 19-year-old James held the BlueClaws hitless through 5 1/3 innings, when Howard took his third turn at the plate, following a Leandro Castro walk. Howard broke up the no-hit bid by James with a double that one-hopped the wall in left-center and scored Castro.
Howard also made an error in the field, when he wasn't able to handle a throw from shortstop Alan Schoenberger.
The Phillies were reportedly targeting Monday as a return date for Howard, to be activated from the Major League disabled list. However, Howard described Sunday as a realistic possibility for a return. "The ankle felt good. It's been getting better everyday. It's just a matter of continuing to the rest of the swelling out, and with that the stiffness goes away," Howard said, after testing his ankle for 6 innings, prior to being pulled from the game for pinch runner Jeremy Barnes.
"I'll probably go down to (Citizens Bank Park) tomorrow, then go over to Lehigh and play and see what they want to do. But, knowing Charlie (Manuel)...once you get back, it's full-bore all the way, so..."
Initially, the BlueClaws had planned to retire Howard's jersey in a ceremony that was scheduled for September 2nd. However, the Phillies' off day was lost when a rained out game against Colorado was rescheduled for that date. With enough notice of Howard's rehab appearance, the Lakewood staff was able to put on a jersey retirement ceremony to be proud of. 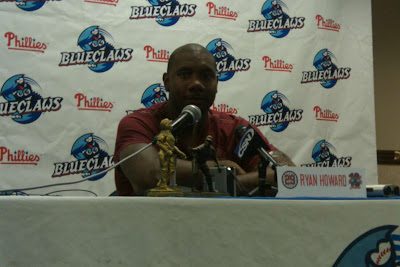 Howard's mother, twin brother, son and girl friend were on hand to celebrate as Ryan became the first player in team history to have his number retired. "Having my jersey retired is something special at any level, whether it's the big leagues or here in Lakewood...to have an organization show you that kind of love and respect, it meant a lot to share it with my loved ones," Howard told a crowded conference room after the game.
Howard was pleased to be back where he got his start in full season baseball. "Lakewood will always have a special place in my heart," Howard said. "(Lakewood) was my first long season. This was the first time I got to experience what a real professional baseball season was like. And I'll never forget when I went home and my dad asked me, 'If you could sum up the season in one word, what would you say?' and all I said was, 'Endurance'."
The Phillies All-star, who has posted a .292 average, slugged 23 homers and driven in 83 runs this year set the BlueClaws franchise record for RBI's at 92, passing Randy Ruiz and Travis "Moose" Mattair.
Fans will be able to purchase raffle tickets to win Howard's game jersey from Friday's outing. A portion of the proceeds will benefit BlueClaws charities and a portion will benefit the Ryan Howard Family Foundation.
________________________________________
Follow PhoulBallz.com on Twitter HERE.