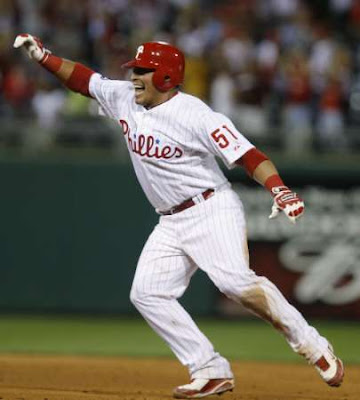 Once again, the Dodgers used Jonathan Broxton to try to lock down a game against the Phillies and once again, the Phillies were the ones actually closing things down.
After Carlos Ruiz smashed the double that scored Jayson Werth and Ben Francisco to lock down another dramatic comeback win, he seemed to have a more difficult time surviving the celebratory barrage delivered by his teammates than he did catching up with the pitch from Broxton that Ruiz drove high off the left-centerfield wall. Ruiz was chased down by Phils players between first and second base, after the winning run crossed homeplate, to congratulate him.
Broxton, who has struggled in the second half, has a 10.13 ERA in 8 outings since the All-star break. Philadelphians have no intentions of hiding their growing love for Broxton, whose reputation as a Phillies punching bag gets larger each time he faces them. The implosion marked the third straight season that the Dodgers experienced a memorable collapse to the Phillies with Broxton on the mound. 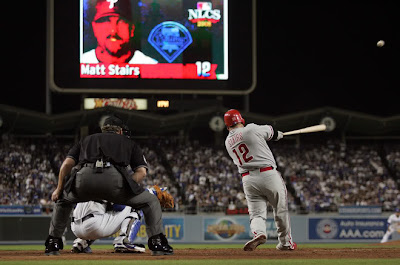 The first came in game 4 of the 2008 National League Championship Series, when Matt Stairs hammered a huge homerun to give the Phillies a win. 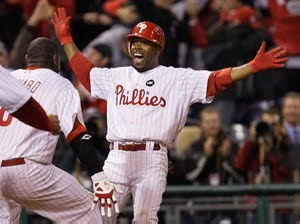 The next instance occured in game 4 of the 2009 NLCS, when Jimmy Rollins capped off another remarkable comeback, by driving home two runs with 2 outs in the 9th inning.
Broxton's troubles on Thursday night began when he hit Placido Polanco with a pitch. He then walked Mike Sweeney and Jayson Werth to load the bases. Ben Francisco grounded a ball through the legs of third baseman Casey Blake, scoring Polanco and Sweeney, and setting the stage for Ruiz's walk-off style heroics.
The Phillies trailed the Dodgers 9-2, entering the bottom of the 8th inning. Rally time began there, as the Phils plated 4 runs to decrease their deficit to just 3, after Jayson Werth, Ben Francisco and Wilson Valdez each got RBI hits.
The win for the Phillies kept the team just 1 game behind San Francisco in the NL wild card chase and 2 games behind Atlanta in the NL East standings.
Bonus notes...
The Phillies' starting pitcher for all 3 Broxton melt downs- Joe Blanton.
On base for Matt Stairs' 2008 HR- Carlos Ruiz.
Scoring the winning run on Jimmy Rollins' walk-off hit in 2009- Carlos Ruiz.
Man who delivered the walk-off hit in 2010- Carlos Ruiz.
_______________________________________
Get down with PhoulBallz.com on Twitter by clicking HERE.