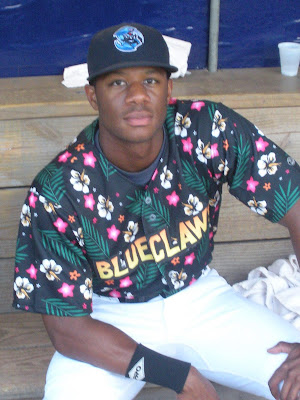 The Mendoza Line is typically used as a method by which to critique or ridicule struggling batters. The informal expression referring to a .200 batting average and is named after former Pirate, Ranger and Mariner Mario Mendoza, who was a strong fielder but didn't perform so well at the plate.

Around Lakewood's FirstEnergy Park, however, fans, broadcasters and media alike may begin associating a new name to indicate a .200 average. That name...former Phillies first round draft pick Anthony Hewitt. With an 0-for-4 outing in Thursday's game against the Delmarva Shorebirds, Hewitt's season average dropped to .199. Hewitt, a right-handed hitting outfielder was originally drafted as an infielder out of Salisbury High School in Connecticut.

Speaking about his own struggles and what he's working on to bounce back, Hewitt, who steadily works closely with his coaches to improve, told PhoulBallz.com in an exclusive interview, "Just staying positive. Not dwelling on the past. It's just a matter of re-grouping, for myself, to get back out there with a positive attitude."

Hewitt's main problem is plain to see. He needs to improve his pitch recognition. Reporters, scouts, photographers, broadcasters, coaches, the opponents and even Hewitt himself are all aware. "You only get one or two fastballs an at bat, so if I can lay off those sliders or change ups, or just balls in general, it'll help out a lot, when I get fastballs," Hewitt said.

In regards to Hewitt being a former #1 draft pick and the expectation levels for his development, BlueClaws manager Mark Parent stated, "(Hewitt's) out there because he's got to be out there. The Phillies still see something in there. He's got to keep playing in some capacity to see if it's going to click."

"I'd like to protect him and put him against this lefty, or that lefty, but I am not afforded that luxury," Parent added.

Lakewood hitting coach Greg Legg has confidence that Hewitt can make the necessary adjustments to improve, and attributes Hewitt's highs and lows to his age. "The younger the hitter, the harder it is to be consistent. The experience factor is important."

Should that argument apply to a 21-year-old playing his third year of professional ball, in a league with plenty of 18-, 19- and 20-year-olds? Likely no. But, Hewitt is still young enough and the Phillies have invested enough money in him ($1.38 million upon signing in 2008), that he's still got opportunities before him. And if all else fails, at least Lakewood could still have claim to the updated moniker for the Mendoza Line, thanks to Hewitt.