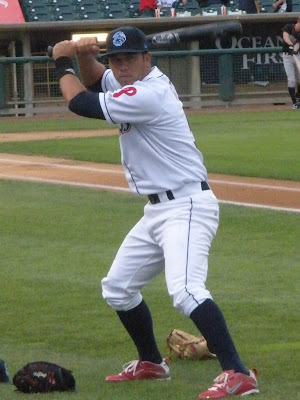 Keoni Ruth is currently an infielder with the Phillies' Class A affiliate, the Lakewood BlueClaws. Singed as a free agent this month, while playing independent ball in Maui, the 25 year old Hawaiian is a versatile fielder who can play multiple positions.
Ruth, a righty batter, was drafted by San Diego in the 21st round of the 2007 amateur draft. He played 3 seasons in the Padres system before finding himself as a free agent this year. Ruth is a friend and off-season training partner of another Hawaii native Keoni DeRenne, who has had three stints with Lakewood this season.
In 18 games thus far with the BlueClaws, Ruth has posted a .224 batting average, laced 6 doubles and driven in 10 runs. In 109 games at 2 minor leagues levels last year, Ruth batted .284 with a .670 OPS.
I had the opportunity to speak with Keoni recently about his transition back into affiliated baseball, his time with the Padres organization and plenty more. Check out the media player below to listen to the full interview.