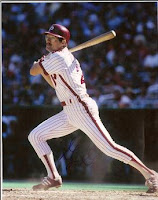 Greg Gross was an outfielder with the Phillies from 1979-1988. In 1973, Gross began his career with the Houston Astros at the age of 20, appearing in 14 games. The following season, he finished 2nd in National League Rookie of the Year voting to the Cardinals' "Bake" McBride, when Gross batted .314 in 156 games.

Gross's line drive swing did not produce a single homerun in almost 1,400 at bats in the Major Leagues to start his career. Following the 1976 season, Gross was traded to the Cubs for Julio Gonzalez. In 1977, Gross hit a career high 5 homeruns for Chicago. He also produced a .322 average that season, as the team's fourth outfielder.

Prior to the 1979 season, Gross was traded to Philadelphia along with Dave Rader and Manny Trillo for 5 players. Gross quickly became a key contributor for the 3-straight division winning Phillies that season, when he posted a .333 batting average in 111 games. While the outfield was locked in with Greg Luzinski, Garry Maddox and the previously mentioned McBride, who also made his way to the Phillies, Gross' accurate arm and steady offensive production proved quite capable of still earning him some playing time.

In the 1980 League Championship Series, Gross had 3 hits in 4 at bats, including a key bunt single off of Nolan Ryan that loaded the bases for the Phils in the 8th inning of game 5, helping them take the lead.

As his career progressed, much of Gross's action came one at bat at a time, in the role of a pinch hitter. In his 10 seasons with the Phillies, he became the all-time team pinch hits leader with 117, which is twice as many as the next closest Phillie on the list, Tony Taylor.

In 1989, the final season of his playing career, Gross would rejoin Houston for one final year before retiring from playing.