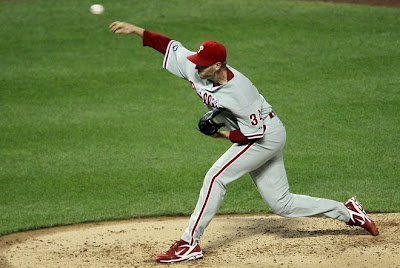 The Phillies (73-57) seem back in control after recovering from a poor 4-game effort against the Astros by sweeping the team with the best record in the league in San Diego over the weekend. Philadelphia will visit Los Angeles for a 3-game series against the Dodgers (67-64) beginning Monday night.

Roy Halladay looks to take over the lead in all three pitching triple crown categories (Halladay already leads the National League in strike outs and ERA), as he needs a win to tie Ubaldo Jimenez and Adam Wainwright for the league's top spot with 17 W's.

LA will counter with Japanese born hurler Hiroki Kuroda, who was an excellent history against the Phillies, posting a 1-0 record and a 0.95 ERA against them in 3 starts.

Continue reading for details on the pitching match ups and plenty more statistical information on this series.

Matt Kemp is a .363 hitter in 27 regular season games against the Phillies. In 43 games since the All-star break, Kemp is batting .242.

In 27 career regular season games against the Phillies, James Loney is a .355 hitter.

In 43 games since the All-star break, Jayson Werth has posted a .321 batting average.

In 20 career regular season games against the Dodgers, Brad Lidge has a 3.98 ERA and has blown 4 of 13 save opportunities.