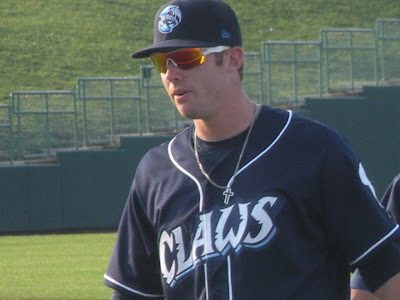 Stephen Batts, a 19th round draft selection in 2009, is currently playing with the Class A level Lakewood BlueClaws. A versatile fielder, Batts can play all over the diamond and often slips into the lineup as a designated hitter.

In high school, Batts was an all-state soccer goalie in North Carolina. He later attended East Carolina University to play both soccer and baseball.

With Lakewood this season, Batts has posted a .281 batting average, 5 homers and 30 RBI in 71 games, becoming a key contributor for Mark Parent's BlueClaws team. Batts recently strung together a 12 game hitting streak for the playoff bound BlueClaws.

Last week I spoke with Stephen about his offensive production, his choice between soccer and baseball, looking forward to the post-season and more. Check out the media player below to listen to the full interview.