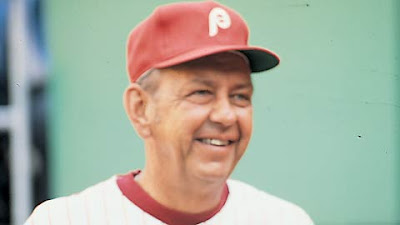 Danny Ozark was the Phillies' manager from 1973-1979. During his tenure as the team's general, Ozark led Philadelphia to three straight division titles. In his playing days, Ozark was a first baseman, who was a career minor leaguer in the Dodgers system.

When Ozark took over the team in 1973, the Phillies were fresh off 5 consecutive losing seasons and 3 straight last place finishes. During his first season in charge, the Phillies would again finish in last place, 20 games under .500, but as his core of young talent, like Mike Schmidt and Larry Bowa, developed, the Phillies' win totals rose. Within 2 years, the Phillies were above .500 and in the playoff hunt until late in the season and the most successful era of Phillies history was about to begin.
By 1976, the Phillies were headed to the post-season for the first time since 1950. The Phils would enjoy a 10-game lead over their nearest division rival at the midway point of the season. Despite a lul, which saw their lead decrease to just 3 games in September, the team won 101 games, the franchise's highest win total in its history and won the NL East division title. Being swept out of the playoffs by Cincinatti left Ozark's crew wanting more.

The Phillies bounced back in 1977, cruising to another 101 wins to clinch their first repeat playoff appearance in history. This time around the Phils fell to the Dodgers in the playoffs. Fans became frustrated with Ozark after the "Black Friday" game in the League Championship Series against Los Angeles, when Ozark chose to leave Greg Luzinski in left field instead of replacing him with the superior fielding Jerry Martin, like Ozark had done in late innings for much of the season. Luzinski then misplayed a ball hit by Manny Mota, which sparked a Dodgers game turning 3-run 9th inning rally. The Phillies would lose the series in 4 games.

In 1978, Ozark led the Phillies to another division title, but again the team lost to the Dodgers in 4 games in the League Championship Series.
The following year, in a season plagued by injuries, the Phillies were under .500 on August 31 when the organization fired Ozark and replaced him with Dallas Green.
During his time with the Phillies, Ozark was widely known to make memorable statements. He was once quoted saying that a particular player's "limitations were limitless" and that a particular situation was "beyond my apprehension". Ozark once replied in regards to the Phillies' difficulties with morale that, "Morality is not a factor with this team." In addition, when he was relieved of his duties in 1979, Ozark told the media that, "Even Napolean had his Watergate."

Ozark, who was still pals with Tommy Lasorda, from his time in the Los Angeles organization, returned to the Dodgers to coach. Ozark lasted 3 seasons, until he had a falling-out with Lasorda in 1982.

The Dodgers' archrival San Francisco hired Ozark as a coach on Frank Robinson's staff in 1983. When the Giants were stuck in the basement the following season, Robinson was fired and Ozark was placed as the interim manager for the remainder of the season. The Giants stayed in the basement, going 24-32 the rest of the way. Ozark retired after the 1984 season.