By Jay Floyd August 19, 2010
Plenty of noteworthy happenings are going on all around the Phillies organization.

The Phillies are the leaders for the National League wild card after defeating the Giants in the first two games of their series in Philadelphia. Something I've pondered regarding this...should the Phillies enter the playoffs for the first time in team history as the league's wild card entrant and advance no further, would they fly a flag to honor it like they do for their other post-season achievements and, if so, what color would it be? The Phillies currently fly red flags for World Championships, blue flags for League Pennants and white flags for division titles.

Expect "Bet your sweet ass" to be this season's quote of the year, a la "Get me to the plate, boys!" If you missed Jayson Werth's remarks about what Charlie Manuel had to say recently about Jimmy Rollins' ability to hit, check out the media player below.

Ryan Howard (sprained ankle) is targeting a Monday return to the active roster. It still remains likely that Howard will make a rehab appearance or two prior to getting back in the everyday Phillies lineup. Where could he wind up? Lakewood is home through Friday, Reading hits the road after Thursday, Lehigh Valley is home Saturday and Sunday, and Clearwater is home Thursday and Sunday.

I spoke with Lakewood pitching coach Steve Schrenk this week about injured minor league starting pitchers Nick Hernandez and Jarred Cosart. Schrenk informed me that both hurlers are expected to be sent to post-season instructional ball that begins on September 15th. According to a reliable source, Cosart threw a successful bullpen session on Tuesday and will throw again on Friday. The 20-year-old righty has been sidelined since late June with an elbow strain. Hernandez, out with an injured shoulder, started Wednesday for the Gulf Coast League Phillies and allowed 3 earned runs in 2 innings. The left-hander pitched in 2 games for the GCL Phils in July before experiencing a setback. 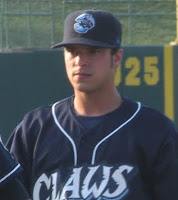 Clearwater's back up catcher Torre Langley (pictured) was used as a relief pitcher in game 1 of a double header on Monday. Langley threw a scoreless 2/3 inning. Langley was with Lakewood for part of this season, prior to being promoted to the Threshers. I informed Lakewood manager Mark Parent about the unique situation that Langley found himself in and inquired which position player Parent would consider using as a pitcher in a tough spot. "I'd go to (Stephen) Batts. 'Cause he's crafty. He doesn't throw the ball straight to first base that often, so it's gotta have a little movement on it," Parent said.