By Jay Floyd August 13, 2010
Normally, when I interview people for the site, it's a player or a coach. That makes the following Q&A session extra special.

A brand new phriend of PhoulBallz has emerged. Seth Jabour, of the exceptional indie rock band Les Savy Fav, took time to chat with PhoulBallz.com this week about fame, the troubles of leaked music, Phillies baseball and more.

Currently on Frechkiss Records, the band also consists of Tim Harrington, Syd Butler, Harrison Haynes and Andrew Reuland. The group pumps out creative content, has a considerably large fan base and loves to perform. No questions asked, Les Savy Fav needs to be on your musical radar.

Hoping to reach some news phans, Seth agreed to answer some questions, so check out what he had to say below.


Seth, you're lead guitarist for Les Savy Fav. What's the best thing about being a rock star?

That all depends on what you mean by 'rock star.' I don't drive an Italian sports car or trash hotel rooms. I guess that archetype is dated. But I love to meet people and perform in front of a crowd.


A lot of folks idolize rock stars and pro athletes. Is the travel involved with touring as glamorous as people imagine? And who has it better, athletes or musicians?

We fly coach and generally travel the roads in a van. I sense a bus in our future, so I expect the glamour factor to step up a bit. As for who has it better - depends on your status in your respective field. My guess is that all the A listers have it sweet. We're like the dudes in the minors - just happy to be playing the game and steadily striving to get noticed.


Baseball fans not familiar with the name Les Savy Fav may unknowingly be familiar with the band's music, as it has been included in some video game soundtracks like MLB 2K7 and Grand Theft Auto IV. What sort of attention has video game exposure brought the band and/or how has that benefited the band?

Don't forget NHL 2K8. Our bassist, Syd, is a big hockey fan. As far as gaining exposure through video games goes, I'd say GTA IV got the most attention throughout the blogging community. I'm a fan of the GTA franchise, so it was a nice feather in my cap.


You grew up in NJ, right? Who were some of your favorite baseball players growing up?

Damn right, Jay! I grew up watching Philadelphia TV stations, so I was a Phillies fan. This was back in - oh, let's see now - the early 80's. I was a fan of Pete Rose (that hair!) and Mike Schmidt (that mustache!). I remember going to see the Phillies play the Cardinals in '80 or '81 and I wanted to meet Mike Schmidt. As my family and I made our way back to our car, I asked my dad where he thought Mike Schmidt was parked. I was under the impression that a post-game Mike Schmidt was parked in the same lot as my folks. What a boob I was.


You now reside in NYC. Are you partial toward either the Mets or Yankees or have you managed to avoid that sort of awfulness?

Nah. Does Newark have a team?


Les Savy Fav's latest release Root For Ruin had its release date pushed up in a rushed fashion after the music leaked online. Talk about what the stress level is like for musicians when something like that happens and how did the band react?

Well, we were pretty bummed, but these days it's par for the course. Tim came up with a clever plan to follow our fans on Twitter with an account called "You Stole Our Record" (now defunct). Anytime someone tweeted about liking our new record, Tim would haunt them, urging them to make a donation to our Pay Pal account. It worked for a little while. Some people took it as a witch hunt and were none too pleased. On the other hand, most folks don't steal music by accident. I think we handled it in stride.


Do other members of the band like baseball or are they partial to other sports?

Syd loves hockey. Andrew likes most sports. He occasionally wears a Mets cap. Harrison is a Chapel Hill native, so college basketball is his sport of choice. I like football. Tim likes skateboarding and swimming. 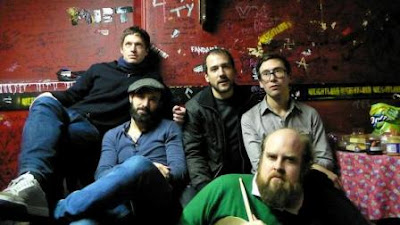 If you were going to compare the band members to the Phillies, which member would be which player?

I think Tim would be the Phillie Phanatic - hairy, no pants, and a sure crowd pleaser.
Syd would be the team manager, Charlie Manuel. He's great at taking charge of the team.
Harrison would be the Carlos Ruiz of the band - calls the shots in over the plate. Writes the set lists!
I'm not sure where that leaves Andrew and I. Infield and outfield. Andrew provides the punch and the power, so- Ryan Howard? I'm partial to improvising and thinking fast on my feet, as well as being able to switch it up, so- Victorino perhaps?


If you had an opportunity - which you do, here- to reach potential new fans, what would you tell them, to convince folks to check out your music or come see a Les Savy Fav show?

We're one of the best live bands working today. Our music is great to sweat to. It's fun without being funny or goofy. I think fans of anything left of center can appreciate our music.


Thanks to Seth for spending time answering the questions. Readers, you can download Les Savy Fav's new album Root For Ruin LEGALLY directly from iTunes. Also, check out Les Savy Fav's website by clicking this link.