Crosscutters' Pettis a Late Round Steal 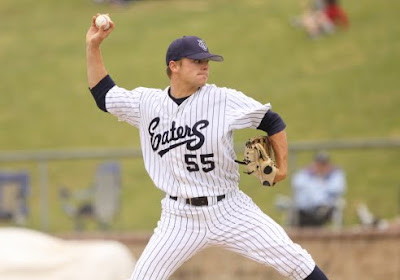 Selected by the Phillies out of UC Irvine in the 35th round of this year's amateur draft, Eric Pettis inked his professional deal quickly and was assigned to Williamsport of the short season NY-Penn (Rookie) League.

A 6'2" right-hander, Pettis split time between starting and relieving for the Anteaters in his senior season, posting a 9-5 record, with 6 saves, 2 complete games and a 3.62 ERA. He also led the team in innings pitched.

Thus far, with Williamsport, Pettis has started and pitched out of the bullpen. In less than 2 months as a professional pitcher, Pettis has proven his value and has outshined the rest of the Crosscutters' pitching staff. The 22-year-old Pettis has a 7-0 record with 4 saves, a 1.41 ERA with 46 strike outs in 44 2/3 IP and a .199 batting average against in 12 games (5 starts) with Williamsport.

In regards to Pettis' initial role as a starter being switched to relief, Lakewood BlueClaws manager Mark Parent said, "When you're talking about a pitcher coming out of school...Pettis is a college guy...coming into the pro's, they're going to end up throwing more than they've ever thrown before or twice as much. So, guys are put into the bullpen to cut down on their innings."

Last season, Austin Hyatt, a 15th round pick in the June draft, went 3-0 with a 0.66 ERA in 17 games for Williamsport, and was promoted to Lakewood by late August.

It isn't clear if Pettis could be given the Hyatt treatment and receive a promotion to A-Level Lakewood, as the BlueClaws approach the playoffs. "It's totally up to Chuck (Lamar)," Parent told PhoulBallz.com in an exclusive interview. Lamar is of course the Phillies' assistant general manager in charge of player development. Parent added, "If in Chuck's opinion and (minor league pitching coordinator) Gorman Heimeuller's opinion, it'll benefit (Pettis) to come here and be a part of the pennant race, and into the playoffs, they'll send him here."
Whether Pettis advances upward by season's end or not, he remains a late round steal and a hurler to watch in the Phillies system.
____________________________________________
You can follow PhoulBallz.com on Twitter HERE.