Myers Promises to 'Stick It' to the Phillies 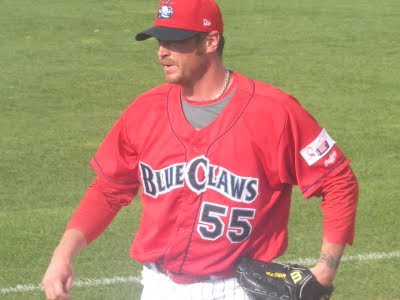 Brett Myers finalized his 1-year/$5.1 million contract with the Houston Astros on Tuesday. Myers made clear his desire to return to the Phillies, the team that chose him as a first round draft pick in 1999. However, the Phillies did not make any effort to re-sign Myers, thus he had to seek other options.

Myers told the media, "I wanted to go back to Philadelphia, but they didn't show an interest, they had other obligations, which is fine with me." He then asserted that he planned to "stick it" to the Phillies whenever he gets an opportunity.

This new rivalry could be quite interesting for the upcoming season. I can't remember the last homegrown player who promised revenge on the Phillies for letting him go. Perhaps it has never happened. Usually when opposing players pledge their desire to beat the Phillies they are guys like Scott Olson or Carlos Beltran, who play for a division rival. The Astros visit Philadelphia in August...Monday the 23rd through Thursday the 26th. The Phillies visit Houston plenty sooner than that, however. The Phils and Stros will face off in the opening week of the season...Friday, April 9th- Sunday, April 11th.

The Astros were long-rumored to be interested in Myers. Houston's general manager Ed Wade, who was once the Phillies' GM, has added another former Phillie to his organization. Wade has displayed obvious familiarity and interest in Philadelphia players, with his latest team. Among the former Phillies in the Houston system are Mike Bourn, Jason Michaels, Pedro Feliz and Yorman Bazardo. Two more former Phils, Chris Coste and Geoff Geary, have played there over the past year also. Oh, and let's not forget Houston's manager, former Phillies first base coach Brad Mills.