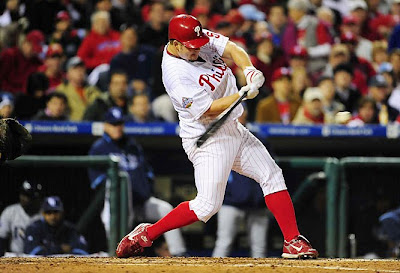 Arbitration? Nah! The Phillies, who were rumored to be in talks with at least two of the three players they exchanged arbitration numbers with, regarding "long-term" contracts, announced Thursday afternoon that they had come to terms with starting pitcher Joe Blanton on a three-year contract, locking him up through the 2012 season.

The contract will reportedly pay Blanton $7 million this coming season, $8.5 million in each of the two following seasons. The $7 million in 2010 is actually less than the Phillies initially offered Blanton, when the two sides exchanged numbers on Monday. Kudos to GM Rube! Nice deal.

In other news...I spoke very briefly today (long enough to get my request for an interview with the Shore Sports Report rejected) with Shane Victorino. He was sporting a fresh shave (no more beard) and he told me that he's very busy getting ready to travel for Jimmy Rollins' wedding. Shane plans to travel to The Caymans on Saturday, for the wedding later that day.

Shane is the other arbitration eligible Phillie who is said to be in negotiations with the team on a contract longer than just this coming season.
**Update**- and now we know why Victorino was too busy to oblige with an interview today...because he was all tied up negotiating a 3-year contract extension with the Phillies. Official details are sketchy regarding Victorino's deal, but it is expected to be for $22 million.
In 5 years with the Phillies, Victorino is a .288 hitter with 50 homers and 375 runs scored in 639 games, including the postseason.
Phans can expect Carlos Ruiz to be next in line for a multi-year deal from the Phillies.