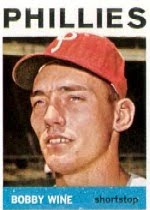 Bobby Wine played with the Phillies for 8 years in the 1960's, but recurring back issues limited him to just 5 full season as the team's everyday shortstop. Originally signed as an amateur free agent in 1957, Wine was a gem of a prospect, hitting well over .300 in each of his first two season in the minor leagues, but he began pulling off on everything inside after he was hit by a pitch. His batting average suffered a considerable amount and it became clear that Wine's defense would be his ticket to the Major Leagues.
Initially, Wine spent time playing both shortstop and third base, but a permanent shift to shortstop in 1963 resulted in a Gold Glove Award. Manager Gene Mauch thought so highly of Wine's glove and range that Mauch kept him in the starting lineup despite an anemic performance at the plate. Wine's best season batting average in the Majors was .244 and he only reached 100 hits in a season one time.
In 1966 Wine missed time with a back injury, but he recovered and led all National League shortstops in fielding in 1967. A year later, in 1968, back trouble returned and he played in just 27 games and missed the remainder of the season following back surgery. It also ended his time with the Phillies as Wine was selected by the Montreal Expos in the 1969 expansion draft, where he was reunited with Mauch who had left the Phillies following the 1968 season and joined Montreal as manager.
Whenever Wine was ribbed about his lack of bat power and low career homerun total, Wine would always reply, "That's okay. I had one more than Ashburn." Of course, he meant Richie Ashburn, the Phillies' Hall of Fame centerfielder, who hit just 29 homeruns in his career.
Wine would spend three full seasons as Montreal's everyday shortstop. After he retired in 1972, he immediately joined the Phillies as a coach, where he stayed through the 1983 season. Wine later coached with the Atlanta Braves, and even filled in temporarily as interim manager following the firing of Eddie Haas in 1985.
Wine's grandson, Cory Wine, was drafted by the Phillies in 38th round of the 2009 amateur draft. He played in 34 games for the Gulf Coast League Phillies last year.
----------------------
Follow PhoulBallz.com on Twitter HERE !