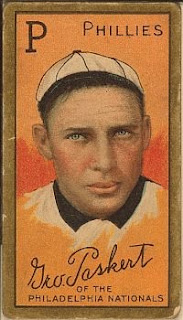 George "Dode" Paskert was an outfielder with the Phillies from 1911-1917. The speedy Paskert's career in the Majors began with Cincinnati in 1907, but following a superb season in 1910, when he batted .300 while stealing 51 bases, Paskert was traded to the Phillies in an 8-player trade in which George McQuillan was the key piece on the other side of the deal.

In just his second game with Philadelphia, "Dode" displayed a big dose of what could be expected from him in the field. Facing the NY Giants at the oddly shaped Polo Grounds, Paskert tracked down a long fly ball in the outfield gap off the bat of Fred Snodgrass. The ball appeared to be a sure extra base hit, until the swift Paskert closed in quickly, dove parallel to the ground and speared the ball with his bare hand. Teammate Sherry Magee, playing Left field that day, would later call it the greatest catch he had ever seen on a ball field.

Paskert's efforts at the plate were generally on pace with his defense. Hitting at the top, or near the top, of the Phillies' batting order Paskert had no trouble getting on base, drawing 91 walks in 1912. Also that season, he batted .315, stole 36 bases, scored 102 runs and was a general all-around threat for the Phils. The front office was so impressed with Paskert, that he was awarded with a 3-year contract.

Unfortunately, a series of injuries held Paskert back and his stats and performances would suffer. He played the next 5 season with the Phillies, playing in under 124 games just once. His best offensive season out of those five was 1916 when he batted .279, knocked in 46 runs and scored 82 runs.

Following the 1917 season, Paskert was dealt to the Cubs for outfielder Cy Williams. Paskert played three season for the Cubs and part of another in 1921 back with the Reds, before he finished his playing days in the Minor Leagues. That year he made headlines by rescuing five young children from a burning building, as he made three separate trips into the burning apartment, in Cleveland.