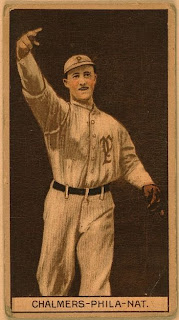 George Chalmers was a pitcher with the Phillies from 1910-1916. Chalmers, born in Scotland, joined the Phillies late in 1910 after winning 25 games for Scranton. He made three starts in the last month of the season, including a 6-1 win over the Giants to earn his first Major League victory.

In 1911, Chalmers shut out Brooklyn in his first start. His season stayed solid through much of the summer, when he blanked the Cardinals 2-0 and then shut down the Giants three weeks later by a score of 2-0 also. Things cooled down for Chalmers after that as he won only 2 more starts, finishing the season with a 13-10 record. His season ERA was 3.11. One big plus for Chalmers was that he threw over 200 innings, but he walked as many as he struck out. This was a negative aspect of his game that would stick with him throughout his career.

After making 22 starts in 1911, Chalmers would make just 23 starts over the following 3 seasons combined. The dramatic drop in innings led to an increase in losses and ERA. In 1913, Chalmers appeared in 26 games, and his stats were far off from his performances of two years prior. His record that year was 3-10 and his ERA was 4.81.

The following season, Chalmers found himself back in the minors, trying to straighten out his game. He appeared in just 3 games for the Phillies that year and he managed to lose all 3 outings.

The time spent sorting things out in the minors proved successful, as he helped the Phillies reach the 1915 World Series with a career low ERA of 2.48 in 26 games. He pitched considerably better that year than his 8-9 record might indicate. He started game 4 of the World Series against the Red Sox, striking out 6 batters, but he lost the game 2-1. That loss put the Phillies in a 3-1 hole in the Series that they eventually lost in 5.

1916 would be Chalmers last season in the Majors as his 1-4 record over 12 games got him released.